The state awarded a new three-year contract to Corrections Corporations of America (CCA) to house inmates on the mainland saying there is not enough prison space in Hawai’i to accommodate the return of Hawaii’s inmates at this time.

The $45.5 million a year contract begins on July 1, 2011 and continues through June 30, 2014.  Under the contract, up to 1,956 prisoners from Hawai’i will be house in the multi-level security facilities–Saguaro Correctional Center (SSC) and Red Rock Correctional Center–in Arizona.

Officials with the state Department of Public Safety say they remain committed to bringing Hawai’i’s 1,700 inmates home.  Since Governor Neil Abercrombie’s announcement on bringing Hawai’i’s prisoners home, PSD has brought 239 inmates back to Hawai’i to participate in community-based programs.

Under the new contract, the state has the ability to terminate the agreement with three months of notice.

“This agreement will give us some flexibility as we continue toward our goal of bringing prisoners home,” said Maesaka-Hirata.

Changes Made to Hawai'i Retirement System 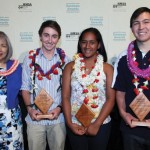