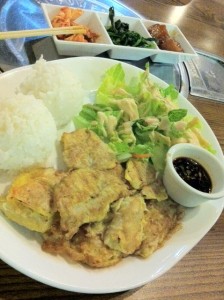 The restaurant offers an assortment of noodles, seafood, beef, chicken, pork and rice dishes. Sushi is half off during their happy hours between 11 a.m. and 2 p.m. and 9 p.m. to 1:30 a.m.

The fish jun was a mistake to order. It was inconsistent in texture and moistness. The Pollack wasn’t so much white as it was a translucent beige color. The first piece of fish was rubbery and the shoyu-based dipping sauce was mediocre. There was little to no flavor in the sauce and little to no flavor in the fish jun. The third piece of fish was moist, nicely egg battered with an almost fluffy consistency. The fourth piece of fish was a piece of rubber again. Even without the dipping sauce, the fish jun was salty, the two scoops of rice was mushy, and the romaine lettuce salad with a mayonnaise-based dressing was unappetizing to look at. Inch width pieces of salad had the slightly pink mayo dressing squirted on top of the leaves. This dish was approximately $12.

The spicy pork was more salty and sweet, than spicy. The pork was tender and moist with a nice bite of ginger and green onions flavoring the thin slices of pork. This dish will have you reaching for a beverage to wash down the salt. Again, the two scoops of rice were mushy but the romaine lettuce tasted better than it looked.

Dinner, around 7 p.m. was a busy time, as order placement took upwards of 20 minutes. A simple French fry order didn’t arrive until after the food was served, almost a half hour after the order went in.

Other patrons came and went, cars pulled up, take out orders were filled, phone orders taken, and the bar had their food requests attended to. 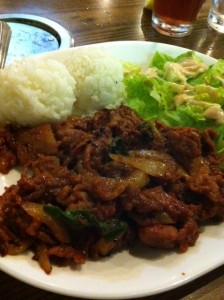 There are intriguing items on the menu list such as: sea cucumber, abalone and sushi sets. Prices vary per dish and can range from $12 for a plate lunch, to $70 for a particularly large sushi set. 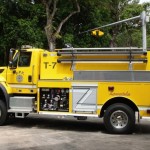 Lei of Aloha 5 at the Ulupono Inn