VIDEO: OHA Board Reaches Impasse In Vote For Maui Trustee

The Board of Trustees with the Office of Hawaiian Affairs will forward the names of nominees for their vacant Maui seat to the governor, after the group failed to reach the six votes required to name a successor on their own.

Trustees heard from more than 50 testifiers, and voted 14 times before a motion was made to adjourn the election for lack of confirmation. 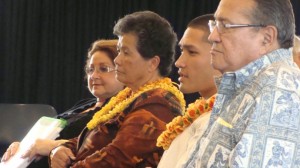 In the final round of voting, trustees gave the youngest and least publicly known nominee, Kaniela Ing, five votes–one short of the amount needed to make a selection.  The two remaining votes were split between Hulu Lindsey and Rose Marie Duey.  Vicens, who had dozens of people testify in his support, and had the backing of former Trustee Boyd Mossman, was eliminated in the 10th round.

Prior to the final determination, Trustee Peter Apo called the apparent impasse “unacceptable.”

Chair Colette Machado agreed saying, “I don’t want the governor to decide, but we have exhausted every possible avenue.” 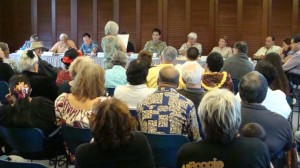 Trustees heard from more than 50 testifiers, and voted 14 times before a motion was made to adjourn the election for lack of confirmation. Photo by Wendy Osher.

On November 22, the OHA board met for the first time to elect a Maui replacement to fill the vacancy created by Mossman, who resigned on November 2, 2011 to fulfill a church calling in Kona.

During the meeting, the board voted 5 (Vicens) to 2 (Duey) with one abstention, failing to secure six votes on either of the two original nominees.  On December 1, the OHA board voted to reopen the nomination until December 2nd to allow for additional nominees, resulting in the four names considered today.

Trustee Haunani Apoliona said that while it might be a “sole and simple incentive for some trustees” to get six votes to avoid public scrutiny and keep the governor from deciding, the ultimate duty of a trustee is to select the nominee with the best qualifications and experience, and the nominee who is “backed by the expressed trust of our beneficiaries and the community–that will be my guide in voting,” said Apoliona, who went on record during the board’s November vote expressing her support for Duey.

As the board voted a final time on today with repeat results, trustees opted to end the vote amongst themselves, and pass the decision-making on to the governor.  “I really want to thank Maui for your patience, your compassion, and just your ability to come and greet us and embrace us in this process,” said Machado. “I regret that we could not come to some agreement.” 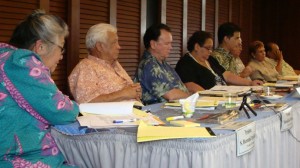 The Board of Trustees with the Office of Hawaiian Affairs will forward the names of nominees for their vacant Maui seat to the governor, after the group failed to reach the six votes required to name a successor on their own. Photo by Wendy Osher.

Today was the 42nd day of 60 days OHA trustees are entitled by Hawaii law to fill the vacancy.  Upon notification of the governor, he will have 30 days to review the list of nominees and make a final decision.

Whoever is selected to fill the vacancy will serve the remaining one-year left on Mossman’s term that was set to end in November 2012. 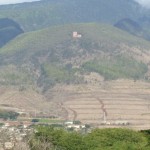 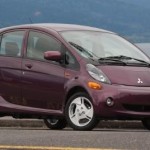