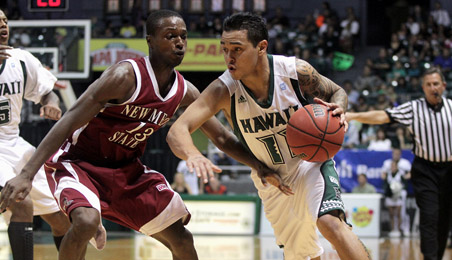 Sparked by the return of senior captains Zane Johnson and Jeremiah Ostrowski, the University of Hawai’i men’s basketball team upset New Mexico State, 91-87, Saturday night at the Stan Sheriff Center. The win helped the Rainbow Warriors improved to 11-8 overall and 3-2 in the Western Athletic Conference while snapping a brief two-game slide.

UH built a sizeable second-half lead and withstood a furious Aggie rally in the closing minutes to pick up a statement win over the Aggies (14-6, 4-1 WAC), who entered the game undefeated in WAC and on a six-game win streak.

“We needed it,” Arnold said of the triumph. “Tonight we stepped up, had a big lead, and finished this game with a victory. I don’t care if it was ugly, or we won by 20, a win is a win.”

The Bows welcomed the return of their backcourt, Ostrowski and Johnson, both of whom sat out of UH’s 74-70 loss to Louisiana Tech on Thursday. Both came up big in their return versus the Aggies. Johnson poured in a season-high 29 points, including seven three-pointers, while Ostrowski’s ball-handling and leadership skills were huge down the stretch, producing nine points, eight assists and four steals.

Joston Thomas added 17 points, nine rebounds and a career-high six assists for UH and VanderJoaquim, who was forced to sit out most of the first half, but still finished with his sixth double-double of the season (11 points, 10 rebounds). Sophomore Dave Rozitis filled in for Joaquim, logging nine points, five rebounds and three blocks in just 14 first-half minutes.

“This was a great win for us,” said Hawaii head coach Gib Arnold after the game. “We were pressing a bit late in the game and a little tired, but we had enough to end that game and we won it and no one can take that away from us. I am so proud of this group. For Zane and Miah for coming back from injury, and the way Vander came back from foul trouble in the second half, it was a great win for UH tonight.”

After trailing early on, UH used a 16-1 run midway through the first half — holding the Aggies without a field goal for seven minutes — to build a double-digit lead. It was a lead they would not relinquish. Behind Johnson’s 18 first-half points, the Rainbow Warriors took a 44-34 lead into the locker room.

New Mexico State cut the lead to 48-42, early in the second half but UH used another huge run to create distance. A 21-8 surge put the Rainbow Warriors up by 19 points, 69-50, with just under 12 minutes left. UH continued to hold a double-digit lead for much of the remainder of the game, however the Aggies put together a furious rally, closing within four points in the final minute. But it was too little to late for NMSU as the Bows sealed the game on the free throw line where they nailed 24-of-30 attempts.

Hawai’i now heads to the road for a pair of games beginning with a contest at Utah State on Thursday, Jan. 26.

Sophomore Kamilah Jackson led UH with her 10th double-double of the season as the Rainbow Wahine earned their first 2-1 WAC record since the 2002-03 season.

Jackson had a team-high 16 points going 4-of-10 from the floor and 8-of-10 from the free-throw line. She also grabbed a game-high 11 rebounds with two assists, two steals, and a blocked shot. It marked her 23 double-double in her career. Sophomore transfer Vicky Tagalicod added nine points with four rebounds and Molokai freshman Kalei Adolpho came off the bench to contribute seven points, five rebounds and one blocked shot.

The Rainbow Wahine struggled early, turning the ball over four straight times to start the game, dropping to a quick 5-0 deficit. From that point, the Bows kept the Aggies close, but trailed until the 7:30 mark in the first half when Jackson hit a pair of free throws to give UH an 18-17 lead. UH never relinquished the lead after that.

The Aggies (4-15, 1-3 WAC) would battle and never allowed UH to get more than an eight point lead, and trimmed their deficit to one point twice with less than four minutes to go in the game. Tabytha Wampler scored a game-high 24 points on 11-of-19 shooting with two 3-pointers made. Wampler also had a team-high nine rebounds with three assists.  Kaitlyn Soto added 12 with four rebounds and two assists.

The Rainbow Wahine hit the road next week to face Nevada on Jan. 26 and Fresno State on Jan. 28.

In men’s volleyball, UH dropped its second straight match to No. 7 Pepperdine on Saturday at Firestone Fieldhouse, 25-20, 25-21, 22-25, 25-23. The Mountain Pacific Sports Federation loss was Hawaii second in as many nights.

The Warriors (2-5, 1-3 MPSF) lost for the third straight time and were swept in the two-match series at Pepperdine for the first time since 2002. Pepperdine (5-1, 4-0), which extended its win streak to five, avenged a two-match sweep by the Warriors last season in Honolulu.

Outside hitters Steven Hunt and JP Marks shared team-high honors with 15 kills. Marks hit at a .345 clip and had the teams’ lone service ace. Newcomer Taylof Averill added 10 kills in his first significant action of the season at opposite. Middle blocker Nick West had seven kills in 11 swings while fellow middle Jarrod Lofty had a career-high eight blocks.

The Warriors return to Honolulu to host a two-match non-conference series against Grand Canyon, Friday, Jan. 27 and Saturday, Jan. 28. Both matches start at 7:00 p.m. at the Stan Sheriff Center. 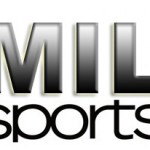