Maui Welcomes Year of the Dragon 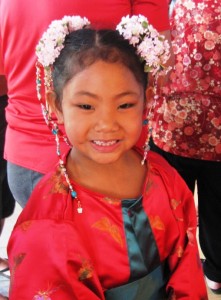 The Maui Mall was packed with revelers today, celebrating the Chinese New Year. Though the Year of the Dragon officially began on Monday, January 23 most local families waited until the weekend to observe the annual event.

Dragons were everywhere in the form of puppets, calendars, t-shirts and signs.

Food, jewelry, plants, souvenirs, toys and noisemakers were plentiful. The mall went all out, hosting a full schedule of events from morning to afternoon. Its public areas were filled with people of all ages and nationalities, many in traditional attire, enjoying the event. Especially charming were youngsters dressed in Chinese costume.

The weather was fine and spirits were high as the Wah Ngai Lion Dancers, a troupe of thirteen dancers and musicians visiting from Oahu, took the stage midday. The group was one of several to entertain. 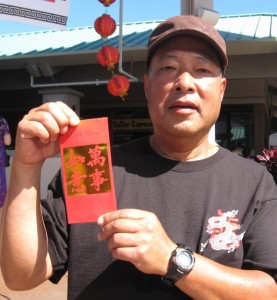 Photos by Irvin took free pictures of youngsters, families and even a dog or two in a Chinese setting.

A historic photo exhibit highlighting Maui’s Chinese past (including the island’s connection with Chinese patriot Sun Yat Sen) was a memorable display.

The dragon occupies the fifth position in the Chinese zodiac and is considered by many to be the mightiest of all astrological signs, signifying success and good luck. 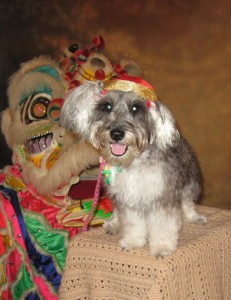 Nico, a miniature schnauzer owned by Shiho Sigematsu of Kahuli went Chinese for the occasion and had her photo snapped by Irvin at the Maui Mall. Susan Halas photo. 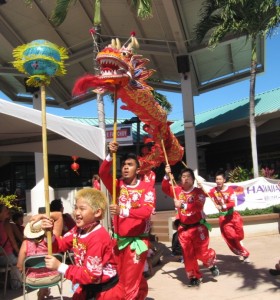 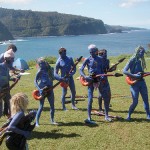 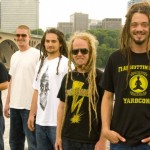