Johnny B’s – Burgers at the Beach – New in Paia 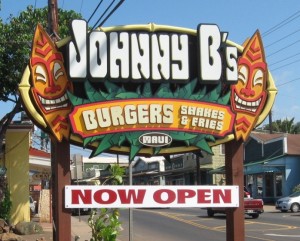 Johnny B’s, a new burger and fries emporium at the entrance to Paia Town, opened last week with a simple menu of old-fashioned American favorites. These classics – all made with top quality local ingredients – bring the gourmet fast food concept to the North Shore beach town.

There was already a line at the order counter when Maui Now visited during their first business day. The customer comments were all favorable.

“Just delicious,” said Kula resident Dave Konklin, who was eating out front in the small roadside dining area. He enjoyed a large cheeseburger ($8.49 for the half pound burger + 59 cents for cheese topping).

The burgers come with an assortment of add-on toppings including teriyaki sauce, grilled pineapple and sautéed mushrooms at a small additional cost. There is no additional charge for the standard condiments including ketchup, lettuce, mayo and pickle and a variety of other toppings. Buns are made fresh by Maui’s Komoda Bakery.  The beef is island raised, all natural – no hormones or antibiotics.

Konklin also liked the large side order of hand-cut spicy volcano fries ($5.49), cooked in cholesterol-free peanut oil. The spices come from Mauian Kevin Carlson, who is the purveyor of Volcano Spices. 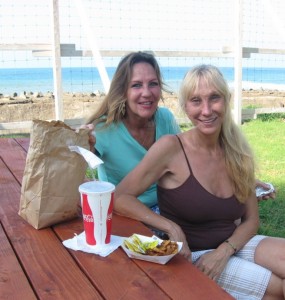 “This will fill a niche in the town,” said Debbie Wilson (right), owner of Maui Girl in Paia. She and visitor Jayne Afoa enjoyed an opening day of lunch at the picnic tables in the back.” Susan Halas photo.

“This really fills a niche in the town,” said Debbie Wilson, the owner of Maui Girl, another Paia establishment. She and friend Jayne Afoa were seated at one of the picnic tables in the back enjoying a similar meal.

Maui Now tried a variety of items from the menu including the grilled cheese sandwich on Hawaiian sweet bread ($5.89). It came table piping hot with a golden light crusty outside, and runny melted cheese inside.

The juicy spicy pulled pork sandwich on soft taro roll ($7.49) was our own favorite. The recipe, said co-owner Pam Leary, “is a little bit ours and a little bit the Food Network’s.”

The fresh tropical fruit bowl ($6.89) was a rarity among fruit salads – every piece colorful and flavorful. The fruit included locally grown apple bananas and Maui Gold pineapple; these and all the other ingredients were ripe and yummy. There were no big bland hard chunks as is often found when the fruit is colorful, but not yet ripe.

Pam’s partner and husband Tom Leary described himself “a nut on fruit. I taste it all. It’s got to have flavor.”

Maui Now also liked the chocolate shake ($6.49). The beverage, served in a 16 ounce container, was smooth and creamy and made with Maui’s own Roselani ice cream.

Johnny B’s also offers a 10 inch all-beef hot dog ($5.89) and a veggie burger that’s made from scratch, not pre-packaged. 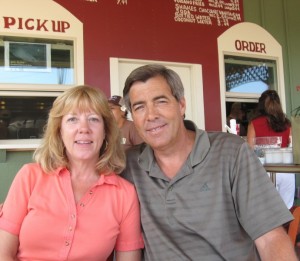 Pam and Tom Leary are the owners of Johnny B’s in Paia. Susan Halas photo.

Owners Tom and Pam Leary are a hands-on pair and their new restaurant is a family affair. Their son Chris was staffing the order window and daughter Sarah, a new mom back East, is expected to follow in the not-too-distant future.

Their concept was influenced by two burger chains popular on the mainland: In-N- Out and Five Guys.

These days, they observed, people have less money to spend on eating out. They want old favorites made in a healthier and more flavorful way. That’s what Johnny B’s offers: a simple, familiar, limited menu, done with gourmet quality ingredient.

“Local produce,” said Pam. “All these little details that contribute to the way the food tastes.”

The new restaurant has one feature seldom found in Paia – parking. There are 12 designated on-site parking spaces for customers.

Tom and Pam are transplants from Connecticut, where they worked together for over 30 years as wedding caterers. Through that business they bought a Kihei condo and have been part-time Maui residents since 2005.

The long-term lease for the property came to them through Sahatthaya “Nui” Mizel, a Kula farmer who sells fresh produce at the Swap Meet.  She offered it to them when her own Thai restaurant and other ventures at the site had permitting problems.

“We thought it was a great location,” they said. “We saw this business as an opportunity to change our lifestyle. Before we opened we were approached by at least 20 people who wanted to buy our lease.”

The site now houses their small eatery and they hope eventually to make use of some of the other parts of the property which include another building and open space fronting the ocean in the rear.

The front structure, once the home of an old-fashioned gas station, took over a year to remodel. Not only did they need to obtain the standard county permits, but the upgrade was made more difficult by the need the need to comply with other regulations for ocean front property. The project team included designer Hunton Conrad, architect Marty Cooper, Engineering Dynamics Corp. and MDL Builders.

The pair said it cost several hundred thousand dollars to do the upgrade, including adding a “kitchen, grease trap and man-hole.”

“That’s what I got for my birthday in August,” said Pam, “how lucky can a girl get?’

Johnny B’s employs over 15 workers and the kitchen manager Nick DiBiase and his crew were busy with customers lined up six deep at the window.

“If it’s successful there might be a second phase,” said Tom. If their first full day in operation was any indication, that day might not be too far off.

And the name? The name comes from a friend in Connecticut. “We just kind of liked the way it sounded.” 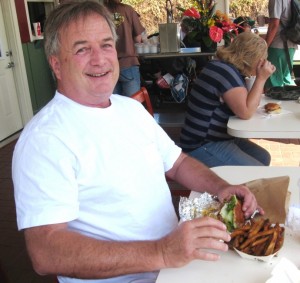 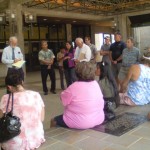 Cochran Hopes Auction Bid Will Save Honolua From Development