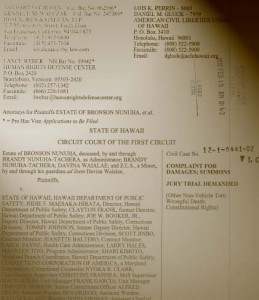 The family of a Hawaii prisoner who was murdered at a mainland prison last year, filed a lawsuit against the corrections facility and the State of Hawaii.

The suit alleges short staffing of the prison, and claims the Hawaii man was forced to share housing with violent, gang-affiliated prisoners.

Nunuha was stabbed more than 100 times by other prisoners during the February 18, 2010 incident at the Saguaro Correctional Center in Eloy, Arizona (a facility run by the Corrections Corporation of America).

“Bronson’s death was senseless and preventable,” said attorney Kenneth M. Walczak in a statement.  Walczak represents the Nunuha family, along with the Human Rights Defense Center and the ACLU of Hawaii.

ACLU of Hawaii Senior Staff Attorney Dan Gluck said the group has long warned the state about the damaging effects of shipping prisoners to the mainland, “This tragedy is bound to be repeated unless Hawaii adopts more effective prison policies,” he said.

Corrections facility officials were not available for comment at the time of this posting, but were cited in at least two media publications declining comment on details of the case.  Attempts are also being made to reach state officials for comment. (*We will update this post once further information is received)

A jury trial is being sought, along with an unspecified amount of damages for memorial expenses, pain and suffering, and attorneys’ fees.

Nunuha, is survived by his mother, Davina Waialae, his sister, Brandy Nunuha-Tachera, and his seven-year-old son.

A copy of the complaint is available at the following LINK. 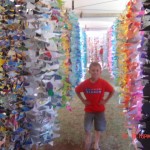 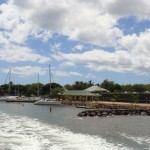