A celebration of life is planned on Maui this Sunday for beloved Kumu Hula and entertainer, Cliff “Palikumaikalewalani” Needham Ahue.

“Being a quiet, humble soldier in his own mind, he made a huge impact on many–not just culturally, but professionally as well,” said Ahue’s first cousin and Alaka’i, Jamie Moanikeala Whittle-Wagner.

The Maui services will be held at the Hyatt Regency Maui Sunset Terrace, home of Tihati Productions: Drums of the Pacific Lu’au & Show, where Ahue had worked for more than three decades.

“He was emcee, choreographer, and everything to us,” said Theresa Ulberg, of Tihati Productions.  “He is dearly missed by everybody,” she said. 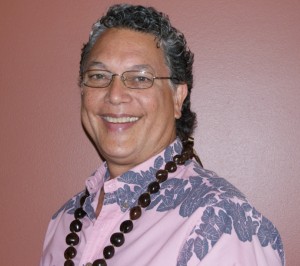 In addition to his longtime work with Tihati Productions, Ahue began his formal hula teachings in 1984 as Kumu Hula of Na Maile Ku Honua.  Respected statewide as a Kumu Hula and chant composer, Ahue “gave unselfishly his knowledge and expertise of the Hawaiian culture, chant and hula, inspiring and teaching others, helping to ensure that these invaluable cultural treasures of the Hawaiian people will remain alive for generations to come,” said Whittle-Wagner.

Through his hula instruction, he collaborated with fellow Kumu Hula, Hokulani Holt, and other Maui kumu in composing a series of dramatic hula productions as part of the consortium known as Na Kini Maka Lehua.

The group produced such works as: Na Mele O Ke Aupuni (Songs of the Nation); Tales of Maui the Demigod; Kahekili, The Warrior Chief of Maui and Maui Moonlight Serenade; Kahekili, Kilohi, Ku Mai Ka Hula, and most recently Kulanihako’i.

“He devoted his time and energy to Hawaiian culture and Hawaiian education,” said Holt.  “He was a kind and gentle man, and quite unassuming in his approach to the world; but his contribution was his steady and unwavering support of Hawaiian things,” she said.

“My kids would call him Uncle Kumu,” said Whittle-Wagner.  “For our family,” she said, “hula is not a choice.  It’s a way of life.  You do it because it’s a family thing to do.” 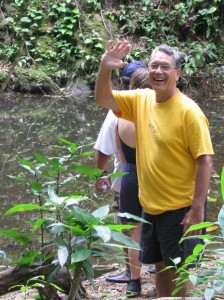 Another hula venture was a weekly hula kahiko show that performed continuously for 20 years at the Kapalua Shops prior to the closure of the Kapalua Bay Hotel.  The show was presented in partnership with Maui County Historian Emeritus, the late Inez MacPhee Ashdown.

Whittle-Wagner said Ahue was naturally attracted to the show because of the storytelling format that Ashdown utilized.  The  style, she said was similar to what Ahue learned from Aunty “Nona”.

Ahue began his studies with Winona Beamer while he was a student at Kamehameha Schools.  It was Beamer that gave him his Hawaiian name, Palikumaikalewalani.  “The official translation fits him so beautifully because it talks of how he stands tall and proud from the highest part of the heavens,” said Whittle-Wagner.

Ahue graduated from Kamehameha Schools in 1973, and earned a Bachelors Degree from the University of Hawai’i at Manoa in 1978.  It was at UH that he also began teaching traditional and contemporary Hawaiian issues as part of the Hawaiian Ethnic Studies Program.

In the community he supported efforts involving the Protect Kaho’olawe Ohana, the Waiahole Waikane farming community, and opposition to H3 on O’ahu.

While he was known for his hula, Ahue was also described as a “profound modern dancer” in his day, having performed with of the original eight-member cast of Jones Ludin Dances We Dance.

Ahue lived in Lahaina, Maui, but was born on January 17, 1955 in Honolulu, O’ahu to Wilford Randolph and Fay Kaonohiokala Whittle Ahue.  He was the second of three children: his older brother was Keith (Linda) Whittle Ahue; and younger brother, Kent Miller Ahue.

Ahue passed away on January 26, 2012 at Hale Makua, Kahului in the care of Hospice Maui after a six month battle with squamous cell carcinoma, cancer of the esophagus.

“He wasn’t really fighting for his life,” said Whittle-Wagner.  “He was living for his life–doing what he needed to do to make the rest of his days as meaningful as before.”

Ahue opted against visitors during much of his sickness.  “Because he had always been the accommodating one,” Whittle-Wagner said,  it was his chance to see visitors on his own terms.

“He was the most humble person I’ve ever known,” said Ulberg.  “Even if he was upset, he would never show it.  He was someone you could always go to for advice, and such a loving person,” she said.

Contrary to a life of entertainment, on December 18, with no microphones, costumes, or drums–family members, friends, and fellow entertainers, put on a show at Hale Makua, devoid of any spotlight.  “They came as themselves,” said Whittle-Wagner.  “It was fabulous.”

Since his sickness, his classmates have written many oli and mele, Whittle-Wagner said.  She called the outpouring “tremendous.”

“What a beautiful journey it has been,” she said.

A celebration of life on O’ahu will take place on Wednesday February 22, at the Hawaiian Memorial Park Mortuary.  Visitation is at 12 p.m. (noon); and services begin at 1 p.m.

Here on Maui, services will be held on Sunday, February 26 at the Hyatt Regency Maui, Sunset Terrace.  Visitation is at 12 p.m. (noon) visitation; services are at 2 p.m.; and release of ashes will take place from 5:30 to 6:30 p.m. at a separate location.

The family sends a special mahalo to: 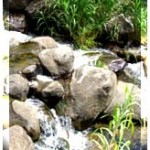