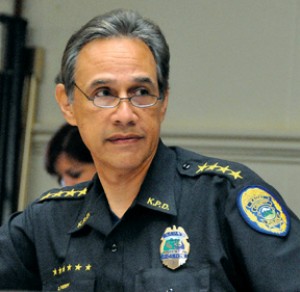 A power struggle on Kauai between the mayor and chief of police is heating up, with the two at odds over the chief’s return to work during an ongoing investigation of the department.

The investigation stems from a complaint filed against high-ranking officials within the Kauai Police Department by an officer who maintains employment at the police headquarters.

Kauai Mayor Bernard Carvalho Jr. issued a statement today defending his decision and authority to place police chief Darryl Perry on leave, despite a unanimous decision reached by the Police Commission informing the Mayor that they wanted the chief to return to work.

“It is still my belief, based on advice from legal counsel, that I have the authority to supervise the daily activities of the chief and that I have acted within my authority for all actions taken regarding this matter,” said Mayor Carvalho in a three-page statement issued this afternoon.

When Chief Perry returned to work today, he said he did so under the direction of the Police Commission.

“I had ordered Assistant Chief Mark Begley to give me my equipment, and he refused based on the orders of the mayor and the county attorney,” said Chief Perry in a phone interview this afternoon.

Without access to his office computer, email, or department issued vehicle, Chief Perry said, “I’m trying to conduct business as best I can under those restrictive measures.”  His work today included returning phone calls, signing travel requests, and doing paperwork… “as much as I can,” he said.

Chief Perry was suspended from February 1-7, 2012, and placed on leave with pay from February 8-21.  Today, he returned to work under unspecified status.

“There has been public speculation and statements regarding the type of leave the chief was placed on,” said Mayor Carvalho.  “Because this is a personnel matter, I will release no details on that aspect of this matter,” his statement indicated.

“I was concerned about my exposure to this individual and asked to have clarification by the commission,” said Chief Perry.

Initially, when the chief made the request on January 30, the mayor said he felt there was no need to have Perry placed on leave saying he felt Perry, “could continue to lead the department under certain conditions that would preserve the integrity of the compliant investigation.”

Upon further discussions it was determined that “an appropriate course of action would be to place him (Perry) on leave until the complaint was properly addressed,” said Mayor Carvalho in the statement.

Today, Chief Perry said, “Based on what has been going on with a recent shooting and other internal issues, I felt I should get back to work as soon as possible.”

Mayor Carvalho had requested a meeting with the chief through Commission Chair Ernest Kanekoa Jr., but Chief Perry declined to meet based on advice of his attorney.

“This meeting was very important before we could even consider bringing the chief back to work,” said Carvalho in today’s statement.  “In earlier discussions I’ve had with the chief on this matter, he expressed deep concerns about protecting the integrity of the investigation, the department, County of Kaua‘i, and his personal interest with respect to further risk and exposure to himself and his family if he were to continue working while the complaint was being investigated.”

During our phone interview with Chief Perry, he said he planned on returning to work again tomorrow.

Mayor Carvalho meantime stated, “The chief will remain on leave until we have discussed and agreed upon terms of his return.”

Based on media inquiries earlier today seeking comment from the Police Commission Chair, Kauai county spokeswoman Beth Tokioka said the response has been a decline for comment.

***The full text of the Mayor’s statement is available at the following direct LINK. 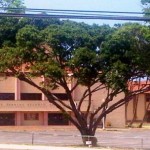 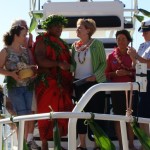