Mariko Langevin was honored for his winning work, titled “Waterboy”, which showed the creativity and application of technical skills learned in school.

“I look forward to seeing it displayed at our nation’s capitol for all to admire,” said Congresswoman Mazie Hirono of Hawaii, who announced the winning entry today.

Starting in June, Langevin will have her artwork displayed along a corridor that leads to the US Capitol Building, alongside other winning pieces from other congressional districts.

A total of 80 students from Kaua‘i, Maui, Moloka‘i, Oʻahu, and Hawaiʻi Island entered the prestigious contest.

The second place award was also issued to a Parker School student.

Fellow junior Brieannah Gouveiah’s piece, “Man and Nature” earned a second place showing, which will be on exhibit in Congresswoman Hirono’s Washington Office over the next year.

“The fact that the top two winning pieces came from Hawaiʻi Island shows that our students’ artistic talents are truly statewide. I congratulate all of this year’s semi-finalists for a job well done and in particular the winning entries from Parker School and Leilehua High School,” said Rep. Hirono.

The third place award was issued to Roldan Galvadores from Leilehua High School for a pencil drawing titled, “Isolation.”

Galvadores’ piece will be displayed in the Congresswoman’s District Office during the same period. 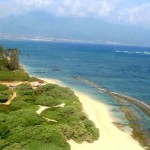 Paddlers Abandon Canoe After Running into Trouble Near Kanaha