Maui Now recently published a summary of a statewide construction report by the University of Hawaii Economic Research Organization (UHERO). According to the UH economists, the construction recovery has failed to materialize. Here are comments from four Maui contractors who tell much the same story.

“There’s a lot out there to bid, that’s a positive, said Dan Blackburn of F&H Construction, “But,” he added, “there is more competition too. So we’re not yet where we want to be.”

Blackburn is the long-time Maui corporate manager for the Lodi, California based company; the firm has been doing business in Hawaii for 30 years. He said there is no hard and fast ratio between what the company bids on and what work they get, but in the past he estimated, “We get maybe 20%.”

Blackburn estimated F&H has about $85 million in jobs on the books. Of that amount about $70 million is on Maui and the rest is on the Big Island. Some of their major jobs locally include the new Kihei Police Station and the new science building on the UH Maui campus.

The Kihei Police Station contract is valued at $30 million. “Ground has been broken,” he reported and there are “about 20 workers on the site. When the job really gets going there may be “as many as 100 to 200. They won’t be all ours, but they’ll be working on it.” As for the science building, “There’s about $10 million left to go on that project,” he said.

Waiting 20 Months for a Permit

What’s making life difficult for his company is the slow pace of the permitting process. “We have about $20 million in work that we could start if only the permits were approved.” Of that $14 million is on the Big Island and the rest is on Maui.

Dan Blackburn of F&H Construction estimated his company has about $20 million in work is ready start if permits were approved. Susan Halas photo.

“For example,” he continued, “We’ve been waiting for the permits for 20 months on the Maui Waena 8-classroom building.”

Blackburn doesn’t know what’s causing the delay. He said, like much of the work the company does, it’s a government contract. “Maui Waena is a state job. We bid and the state gets the permits. But until the permits are in place the job doesn’t start.”

Sandra Duvauchelle, who heads Lehua Services in Wailuku, is one of the few women in the industry to hold a general contractor’s B license. Her company works primarily in residential construction. She thinks she can see the light at the end of the tunnel: “Currently we have three residences under construction and were finishing on a fourth,” she said. “This time last year we had none.”

“There’s a little bit more out there than there was before,” but to her it seems, “that a lot of it is tied to the loosening of lending qualifications, and that hasn’t happened yet.”

The loan guidelines are very stiff, she observed, “but the rates are great if you do qualify.” Even with a best case scenario she said, “What you’re bidding now is going to be 12 to 24 months in the pre-construction phase.”

“In our industry there’s an urgent need for liquidity,” said Tom Cook, vice president of TMC General Contracting Inc., “but we can’t get it.” Cook said banks see construction loans as “high risk” and would-be borrowers are having a hard time finding the money.

Cook’s company is best known as a builder of luxury homes. He said TMC currently has 14 employees and $8 million annual gross sales. “This year it’s improving somewhat,” he said, noting greater activity in the commercial construction. But as far as residential goes,  “a lot of property fails to appraise.” Asked about his experience with permits, Cook had praise for Maui Mayor Alan Arakawa, “There’s been a noticeable improvement in the permit review,” he said.

“This year is, if anything slower for us than last year,” said Michael Bissel, a project manager for Arisumi Brothers, Inc. of Kahului.

“Last year we were finishing up mostly jobs that were already in the pipeline and that carried us. Those jobs are completed and there’s nothing new starting that’s significant. It does seem that there are more requests for bids, but there’s also more competition too.”

Bissel said Arisumi Brothers has some smaller jobs, “all under a million.” He is keeping his fingers crossed that the somewhat larger jobs, like the expansion to the Nisei Veterans Memorial on Lower Main in Wailuku, will last until something better comes along.

“There would be more starting, he said, but they can’t get financing.”

Presently, he said that the Arisumi crew is at about 27 workers, “down about two-thirds from what it was.” His crystal ball sees 2012 as “continuing to be slow; perhaps it will improve in 2013. We still don’t know if we’ve bottomed out yet.” 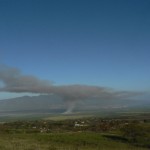 Maui's Cane Burning - How Dangerous Is It?