One of the vehicles involved in the fatal accident was severed; the other was crushed on the front end from impact. Photo by Wendy Osher.

***An UPDATE is now posted at the following direct LINK.

The involvement of speed and alcohol are suspected as factors in a Sunday morning crash that left five dead and four injured on Maui.

All five were passengers in a Dodge Neon that was headed north on the Kula Highway when it crossed the center line and collided head-on with a Suzuki headed in the opposite direction.

Maui police say all five passengers were ejected from the Dodge vehicle. Four of them died on scene, and the fifth, was transported to Maui Memorial Medical Center where he later expired.

The driver of the blue 1998 Dodge Neon, a 21-year-old Pukalani man, was transported to the hospital in stable condition.

The three occupants of the blue 2003 Suzuki Aerio four-door sedan were also injured in the crash.

The 46-year-old male driver from and his 47-year-old female front-seat passenger, were treated and released. A 55-year-old woman who was a passenger remained hospitalized at last report in stable condition.  All three occupants of the Suzuki are residents of Pukalani.

According to police reports, the 1998 Blue Dodge Neon, driven by a 21-year-old Pukalani man, was headed north (Paia-bound) on Kula Highway with a total of six occupants aboard.

According to police reports, the vehicle was believed to be traveling at a high rate of speed when the driver lost control, began to spin counterclockwise, crossed the center line, and collided into a Suzuki headed in the opposite direction.

Following the collision, the Suzuki came to rest on the south shoulder of Kula Highway, facing north, said police.

As a result of the collision, the Dodge sheered in half, with the front half coming to rest along the guard rail. The rear half landed in a brush area on the west shoulder of Kula Highway, according to police reports.

The two pieces landed approximately 185 feet apart from each other, according to Maui police.

Out of the 6 occupants of the Dodge, only the operator was wearing a seatbelt, according to the initial investigation.

The rear seat passenger was not using a seatbelt and remained in the hospital in stable condition.

The accident was the 10th traffic fatality on Maui County roads this year compared to three at the same time last year.

The Dodge vehicle in volved in the Kula Highway crash was severed into peices following impact. Photo by Wendy Osher.

Five people are dead and several others are injured following a morning head-on collision in Kula.

The accident was reported at 6:36 a.m. on the Kula Highway, just north of Noholoa Place.

According to the preliminary investigation, a 1998 Dodge four-door sedan was heading towards Pukalani and crossed the center line, colliding into a 2003 Suzuki four-door sedan.

Five of the six occupants from within the Dodge were ejected from the vehicle, according to Maui Police Lt. Wayne Ibarra. The Dodge vehicle split in two according to the investigation and witness statements.

“Upon police arrival, four of the occupants had succumbed to injuries at the scene. The fifth fatality, a male, expired at the Maui Memorial Medical Center,” said Lt. Ibarra.

Three of the occupants of the other vehicle (the 2003 Suzuki) were transported with non-life threatening injuries to the Maui Memorial Medical Center, according to police.

The operator of the Dodge had to be removed from the vehicle by the fire department, and his condition was unknown at last report.

“A preliminary investigation reveals that police investigators do suspect speed and alcohol. They are also investigating the possibility of narcotics or drugs,” said Lt. Ibarra.

This was the 10th fatality on Maui County roads this year, compared to three at the same time last year.

Police say the initial investigation indicates that the Dodge was full of young adults. Preliminary reports indicate that some of those involved in the crash were from Upcountry and West Maui.

Notification and identification, it is still pending, according to police.

“Any time, especially with speed as a factor in any accident, you’re going to have some damages and potential injuries,” said Lt. Ibarra.

“It’s very tragic, and although this is a holiday weekend—we still have another day in the holiday—so we just request that people drive more carefully, respect each other on the road, and drive with aloha,” said Lt. Ibarra.

The accident was reported at 6:36 a.m. on the Kula Highway, just north of Noholoa Place. Photo by Wendy Osher.

Maui police say the cars involved in the accident included a blue 1998 Dodge four-door sedan. Authorities say the vehicle was traveling north on Kula Highway towards Pukalani, when it crossed the center line and collided head-on with a 2003 Suzuki four-door sedan. Further details will be posted as they become available. Five people died as a result of the accident. The identities are pending release.

Five individuals suffered fatal injuries in a Sunday morning accident on the Kula Highway, according to Maui Police.

The accident forced the closure of Kula Highway at 6:36 a.m. (on Sunday, March 25, 2012), while police conducted an investigation.

The Kula Highway road closure extends from Noholoa to Hoopalua Drive, with traffic being diverted down to Lower Kula Highway.

The fatalities included one female and four males, according to medics.

Maui Police Lt. Wayne Ibarra said the accident involved two vehicles, one of which appeared to have gone left of center, colliding with the other vehicle traveling in the opposite direction.

The accident remains under investigation.

***Check back for further updates as they become available. 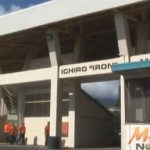