Maui’s own popular 7-piece band Freeradicals Projekt is packing up and taking to the open roads of California next month for their first tour to promote their debut album “Soulfire Radio.” The band has been fundraising for the trip with a relatively new concept from the website Kickstarter.com.

On Kickstarter anyone can create their own online campaign for any project idea. You set a project fund goal that covers the expenses you’ll need to ‘kickstart’ your project, and then you are given an allotted time to meet the goal. Friends, family, fans or anyone else who supports a project can donate money directly through the website to the cause during the campaign.

Freeradicals Project set their donation goal at 7 grand, an amount calculated to cover nearly all of their tour expenses including airplane tickets, lodging, transportation, food and equipment.

“We need one last push and any help we can get,” said Freeradicals Projekt‘s saxophonist Ami Schoor.

The band’s charming promotion video and rising campaign success got them attention from The Daily Buzz show, which featured them as an example of how bands are using Kickstarter.com as a new way to make their dreams come true.

“The tour was always a vison of ours, but in order to make the tour a reality we needed to use the platform of Kickstarter to raise the funds for it,” said Schoor.

Freeradicals Projekt has already planned out a great deal of their tour. Their first stop will  be at the popular underground music festival “Lightning in a Bottle,” in Santa Ana, California. They’re particularly excited to play at this venue because it is nearly impossible to book a gig there and brand-new bands rarely make the lineup.

After the festival they’ll cruise down to LA to play at the famous Sunset Boulevard hot-spot, The Roxy. Schoor was excited to share with Maui Now that this will be a big show for the group because some scouts from major record labels have already pledged to attend.

The rest of the tour includes stops in San Diego, Santa Barbara, San Francsico, and Sacramento.

“We have three weeks to do it and we’re going to try and play as much as we can. If there’s idle time between gigs we might even post up, renegade style, and play on the streets to gain even more exposure,” said Schoor.

While they are still on the island Freeradical’s Projekt have been playing shows every week, spending as much time in the spotlight as they can to try and promote their campaign. Their show last weekend at Charley’s Restaurant in Paia was extremely popular, generating a surge in their tour funds from supportive fans.

“The energy at the Charley’s show was so high. We were blown away by Kings of Spade from Oahu, who played both shows with us. Their performance was so good that by the time they were finished we knew we had to step it up, so when we were finally on stage we reached a new performing plateau.

After that it felt to me like we were finally ready to go on the road. If we can do what we did on Saturday at every venue we play in California, I think the future is really bright,” Schoor said.

Freeradicals Projekt has several pre-tour shows planned before their big launch at the end of May. Keep current on their upcoming show details with Maui Now’s Event Calendar. 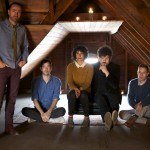