Hawaiian Holdings, Inc., parent company of Hawaiian Airlines, Inc., today reported total operating revenue of $435.5 million for the three months ended March 31, 2012, or a 19.1% increase from the same period one year ago.

Carrying capacity for the airline for the quarter increased 12.8% year-over-year to 3.1 billion available seat miles from the first quarter a year ago.

“Despite higher fuel costs, demand for our long haul services has stayed strong. Adding a sixth A330 and inaugurating our Fukuoka-Honolulu service were the operational highlights of the quarter,” said Mark Dunkerley, the president and chief executive officer of Hawaiian Airlines, in a written statement.

“Continuing the eventful period we are in, we have three more A330s arriving in the second quarter, allowing us to start service to New York and boost capacity on a number of other routes. We are particularly pleased to have reached a long term labor agreement with our Flight Attendant union.” 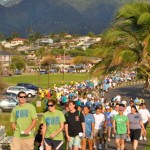