The proposed construction of two additional lanes and related improvements is part of a final upgrade to the Piilani Highway to expand the highway to a total of four lanes in accordance with state and county transportation plans.

The project, which spans approximately 1,000 feet, includes plans for the installation of new traffic signals at Okolani Drive and Wailea Ike Drive at the proposed Honua’ula project access road intersection.

The project was proposed by Honua’ula Partners, A&B Wailea, Keaka LLC, and ATC Makena Holdings in coordination with the state Department of Transportation.

The state DOT has since filed a finding of no significant impact.

The project is located at the tip of the traditional district of Honua’ula and Southwest district of Kula.

For many years, the FEA document notes, that the only way to get to Wailea ‘Ike and Makena from Kihei was by an ancient walkway starting at the ocean side of Kalama Park.

Ancient methods of canoeing and coming down from Ulupalakua upon the footpaths continued, but walking along the sea coast eventually gave way to horses and ox drawn carts, according to details of the FEA.

The path along the shoreline eventually became a dirt road for vehicles, and as Kihei kept growing, it was deemed necessary to build Pi’ilani Highway.

With Honua’ula and Makena Resort receiving recent land entitlements, a widened corridor the document states, would accommodate projected increases in traffic flow in the area.

As part of the cultural assessment, three individuals–Jenavive Monika Kaleilehua Clubb, Johanna Kuuleilokelani Shin-Amorin, and Eugene C. “Herman” Clark, Sr.–were interviewed to gain an understanding of likely cultural practices which occurred in the vicinity of the project.

Jenavive Monika Kaleilehua Clubb is the granddaughter of Annie Wilcox who owned 80 acres of land in Honu’aula.   Her mother and grandmother talked about Ulupalakua and how they would trade their fruit with the fishermen in Makena, which was a progressive fishery.

Johanna Shin-Amorin, who has lived in the Maui Meadows area since December 1973, said there are problems with inadequate infrastructure and beach access.

Eugene Clark, Sr., who has lived on Maui since 1935, remembers the Kihei region when Kenolio was the main road in Kihei, and the area was covered in kiawe and boulders. He also recalled the use of the Old Ulupalakua Road by Kula residents who would come down from a location near the Chang’s house.  He raised concerns over too much development in Kihei.

The proposed highway widening improvements to the Pi’ilani Highway traverses lands, which in the prehistoric period, were used for trails between the mauka and makai settlements.  The FEA further states that the area was used primarily for cattle ranching during the period after 1850.

There are no known archaeological resources which will be adversely impacted by the proposed project, according to the Final Environmental Assessment.

Based on informant information and the existing land use context, the FEA states that there is no evidence of current or recently occurring cultural practices along the project corridor.

The Office of Hawaiian Affairs provided comment that there are native Hawaiian cultural practitioners requesting protections for access to and identification of cultural, historical and spiritual sites in Honua’ula.

OHA recommended consultation with these stakeholders to clarifying cultural impacts along the project corridor that were potentially overlooked inadvertently.

A total of nine individuals were interviewed for a Cultural Impact Assessment of the area, conducted by Hana Pono LLC.

However, the CIA report (completed in 2009) concluded that there were no known gathering practices or access concerns within the property. 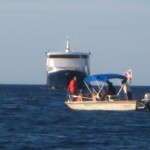