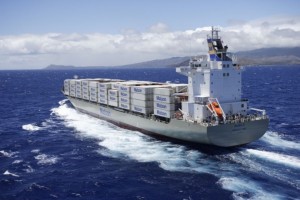 For the second time, the US Coast Guard has awarded Matson Navigation Company the 2012 Rear Admiral William M. Benkert Award for Environmental Excellence.

“Matson is the only carrier in the world to have a zero discharge policy – this means that nothing is discharged into the ocean, with the exception of food scraps,” said Matt Cox, president of Matson, in a written statement.

“When we were first honored with the Benkert Award in 2006, Matson and SSA Terminals had just signed a new ‘green port’ lease agreement with the Port of Long Beach, which involved a commitment to reduce air emissions in port by shutting off our vessel diesel generators and plugging into the local electrical grid, a process called cold ironing,” said Ron Forest, senior vice president of operations.

“This technology set a new standard for terminal leases in Long Beach. Because the concept of using a dockside electrical infrastructure to power ships while in port was new, the project involved innovative engineering work. By the end of this year, all of Matson’s motor ships that call Long Beach will plug in – making our terminal facility a 100% cold ironing operation, far ahead of the regulations set by the California Air Resources Board.”

“Matson also has learned through experience about the power of partnerships in developing new processes and technologies that advance marine environmental protection,” said Paul Londynsky, vice president of safety, quality and environmental affairs at Matson.

“We have a longstanding and successful relationship with the California State Lands Commission in addressing issues related to invasive species and ballast water management. We have also partnered with the US Coast Guard in testing a ballast water treatment system on one of our vessels. The success of that project led to Matson having one of the first ships to receive approval for the testing under the Coast Guard’s Shipboard Technology Evaluation Program.”