Many in Maui County are eager to learn more about the billionaire buying the Hawaiian Island of Lana’i.

The purchase plans of Oracle CEO and co-founder Larry Ellison were made public yesterday.

Today, Sen. J. Kalani English, who represents the district that includes Lana’i (and also represented Lana‘i as a Councilman from 1997- 2000), released a statement saying:

“To the people of Lana‘i this transfer of ownership is much more than a business transaction.  It is the livelihood of a community and of an island. As such it remains imperative that cultural and conservational values be maintained.”

Over the past two decades David Murdock has been the major land owner of Lana‘i, building and maintaining various operations including La Ola, a photovoltaic solar farm. File photo of La Ola by Wendy Osher.

After speaking with a personal representative of Ellison’s, Sen. English was encouraged, saying:

“I feel that he shares this same belief. And I look forward to meeting with him in the future, so that I can develop a better understanding of his vision. It is my hope that this new ownership is one which works with the community to foster a healthy and vibrant Lana‘i.”

The planned sale was made public in a transfer application filed with the Public Utilities Commission on Wednesday; but the transaction is still subject to final government approval.

Sen. English shared his appreciation to Murdock for his efforts in sustaining the island over the years, saying that, “he hopes the community will see a bright future under its new ownership.” 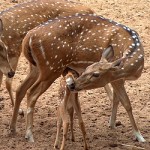