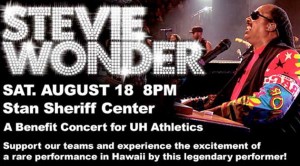 University of Hawai’i supporters will have a unique opportunity to help the Athletics Department and experience the excitement of a rare Hawai’i performance by the legendary Stevie Wonder when he performs on Saturday, Aug. 18 at the Stan Sheriff Center.

Tickets go on sale Friday, July 6 at 9:00 a.m. and can be purchased online (www.etickethawaii.com) or by calling 944-2697. Ticket prices range from $70-$125. This show will be “In-The Round” with a turntable stage, creating an intimate atmosphere and closer views for all seats. Proceeds from this concert will benefit the UH Athletics Department, and it is produced in association with BPE Entertainment.

One of the most celebrated and loved figures in music, Wonder has garnered 25 Grammy Awards, charted 32 Number One singles, and sold over 100 million units worldwide. He has received the Lifetime Grammy Achievement Award, and in May was given the Billboard Icon Award.

Despite all of the acclaim, he remains an earnest, engaging and thrilling entertainer, as seen in his triumphant performance in England for the Queen’s Diamond Jubilee. Although decorum prevented her from dancing and singing along, Hawai’i fans will have no such reservations. See: http://www.youtube.com/watch?v=q1HuRXwUfrw