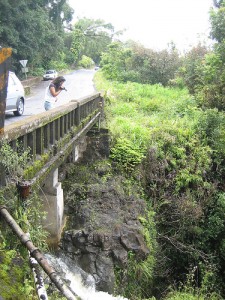 An 18-year-old male from Mesa, Ariz. reportedly died from a 40-foot fall off the bridge near Makapipi Falls just past mile-post 25 on Hana Highway at approximately 1:51 p.m.

The man went over a guard rail where he slipped and fell down onto some rocks and then into the pond, according to Fire Services Officer Lee Mainaga.

Bystanders at the bridge called emergency responders and helped flag passing motorist when fire Engine 7 from Hana arrived at the scene at 2:03 p.m., followed by Medic 6 of Hana.

The male, who was here visiting with family, did not resurface after falling into the water. Residents who witnessed the incident reported signs of obvious death. The body was discovered at 2:25 p.m. submerged under the water approximately 30 feet by a Nahiku resident who made his way up the river and eventually gained access to the pond with dive gear from downstream.

At that time rescue efforts were suspended and body recovery efforts were initiated, according to Ryan Joslin, the Maui County Paramedics Association’s public information officer.

MFD Air 1 flew Rescue 10 personnel into the pond where Rescue 10 divers found and extricated the victim. Air-1 then airlifted Rescue personnel along with the victim to a landing zone where MPD assumed control of the victim.

The male was here vacationing with his father, the father’s girlfriend, and the girlfriend’s niece. 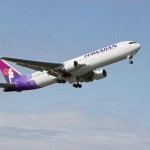 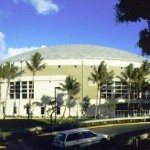