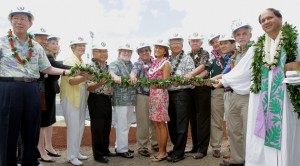 Thanks to a $5 million donation the University of Hawaii at Manoa is planning to build the Clarence T.C. Ching Athletics Complex, a three-story building that will provide grandstand seating for approximately 2,500 fans when completed in winter 2013.

A groundbreaking ceremony was held Tuesday on the grounds of the new Clarence T.C. Ching Athletics Complex. Dignitaries including Governor Neil Abercrombie and UH Manoa Chancellor Tom Apple were on hand for the official blessing and ‘o’o ceremony.

“As has been reported both locally and nationally over the past year, our athletics facilities need to be enhanced and upgraded,” said UH Manoa Athletics Director Jim Donovan. “The Clarence T. C. Ching Foundation is leading the way to build a partnership that will help create a facility at the center of the makai campus, that will benefit our student-athletes, student-body, and the community as a whole. I am very grateful for the support.

Construction of the new LEED Certified Building will begin in July 2012, and will rise as a new three-story building on the mauka side of the existing Clarence T.C. Ching Field.

The interior of the building will include offices, locker rooms and a meeting room for women’s soccer, cross country, track and field, and sand volleyball. The complex will also include a sand volleyball venue with 800 seats and two competition courts. In addition, lofted space for future facilities, such as concessions, a ticket office and broadcast booths, will be provided. The entire complex will seat approximately 4,100.

“The Clarence T. C. Ching Foundation is Mr. Ching’s vision realized, creating a longterm funding source for charities and organizations that benefit the people of Hawaii,” said Jack Tsui, chairman of the foundation. “During his lifetime, Mr. Ching was a loyal fan of University of Hawaii athletics. We believe he would be pleased that, through the Clarence T. C. Ching Athletics Complex, the foundation will be supporting team- and leadership-building programs, as well as student wellness, for generations to come.

“The UH Manoa Athletics program has made tremendous strides in recent years,” said former UH Manoa Chancellor Virginia S. Hinshaw. “This investment by the Clarence T. C. Ching Foundation is helping us capture the momentum created by our outstanding year in athletics and moving it outward to our students and the community beyond. Becoming a destination of choice requires investment in facilities, and I couldn’t have asked for a better partner in this than the Ching Foundation.”

The gift will transform Cooke Field, the school’s only on campus, all-purpose track and field, football, soccer, sand volleyball and recreational facility, to more fully realize its potential as a center of student activity.

The funds from the Clarence T. C. Ching Foundation will be used in conjunction with state funding to support the following:
* Development of an athletics facilities master plan
* Enhance athletics facilities on the makai campus including a facility to house and support a wide variety of activities – from band and soccer practice, to intramural sports, and events like the Special Olympics.

“We are delighted and honored to receive such a substantial gift from the Clarence T. C. Ching Foundation,” said David McClain, President of the University of Hawaii System. “The Clarence T. C. Ching Athletics Complex will enhance the experience our students get at UH Manoa, giving students a place to gather to participate in sports, watch those competitions, practices or performances.”

Clarence T.C. Ching, born on Kaua’i in 1912, was a real estate developer, banker, affordable housing pioneer and philanthropist. The 1932 Saint Louis School alumnus became well known for developing the areas around Honolulu Airport, Salt Lake, Moanalua, Fort Shafter and Tripler Medical Center. He built Kukui Gardens, one of the largest affordable rental projects in the state, and actively served on a number of boards, school and community organizations. 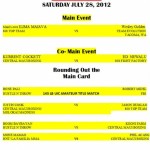 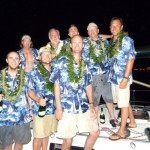