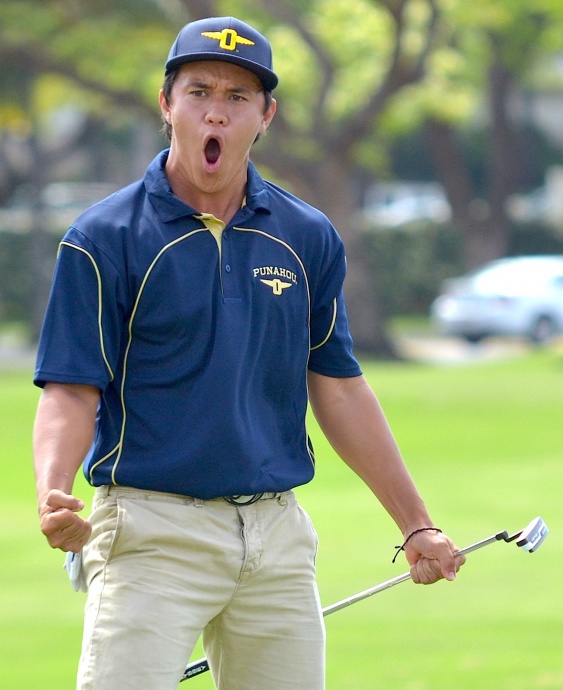 Punahou’s Kalena Preus reacts to his birdie putt at No. 18 in Wednesday’s final round of the state boys golf tournament at the Royal Kaanapali Golf Course. Photo by Rodney S. Yap.

Punahou School’s Kalena Preus capped his final round Wednesday at Royal Kaanapali Golf Course with a long birdie putt at No. 18 and a victorious snarl.

Preus claimed the 2013 David S. Ishii Foundation/HHSAA Boys Golf State Championship by carding a final round 4-under-par 67, that not only erased a four-stroke deficit from Tuesday, but allowed the Buffanblu golfer to win the medalist title by four shots.

The Punahou senior finished the 36-hole tournament with a 136 total, four strokes better than last year’s champion John Oda (72—140) of Moanalua and five shots ahead of first-round leader PJ Samiere (76—141) of Punahou.

Preus made his big move Wednesday on the 14th hole, where he made eagle following a a booming 275-yard drive to within 10 feet of the cup. 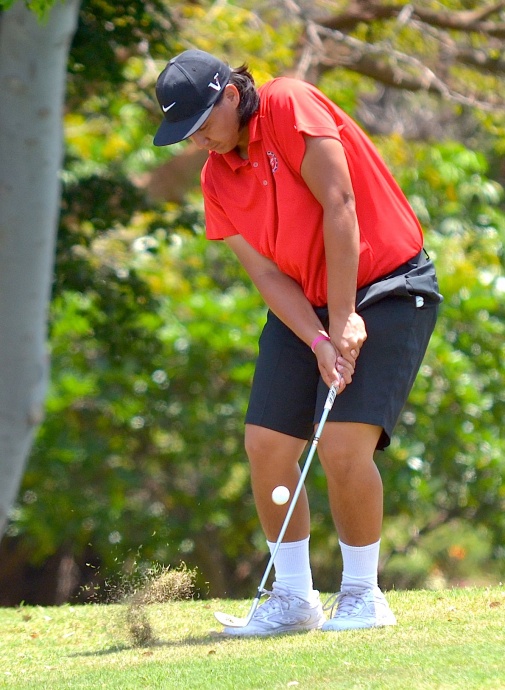 Lahainaluna’s Malu Rosenthal was the highest finishing non-Oahu golfer at 12th with a two-day total of 76-73—149. Photo by Rodney S. Yap.

While Oda and Samiere each had a pair of bogeys down the stretch, Preus played one group ahead and closed out the final six holes in 3-under.

Punahou followed in the championship footsteps of the girls, who won at Kaanapali last week. The sweep was the fourth for the school since 2008 as Punahou crushed defending state champion Moanalua by 19 strokes. As a team, the Buffanblu finished with a 7-under-par 561 to Moanalua’s 580. Kamehameha Kapalama was third at 616.

The Buffanblu earned their fourth title in six years by producing five of the top eight individual scores.

Samiere, who led the way with a 6-under-par 65 on Tuesday to help Punahou take a 13-shot lead after the first round, finished third in the individual scoring. Mid-Pacific golfer Skye Inakoshi was fourth (75—143), followed by Kamehameha’s Dunaway Spencer (68—144). 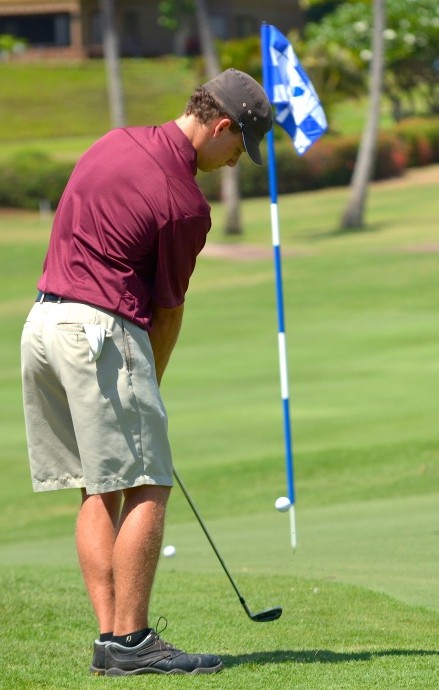 Baldwin’s Ariel Elftman-Hanson played with the first-round leaders in the last group Wednesday at the Royal Kaanaplai Golf Course. Elftman-Hanson carded a 6-over-par 77 for a 151 total, which left him in 16th place. Photo by Rodney S. Yap.

Punahou senior Zachary Braunthal (71—145) was 2- under on the back nine to finish sixth. Classmate Ryan Lloyd played the final eight holes in 1 under and closed at 74—145, while freshman Kyle Suppa (70—147) sank five straight birdies coming in to grab the eighth spot.

The Maui Interscholastic League top finisher was Lahainaluna’s Malu Rosenthal, who finished 12th with 73—149 total despite nursing a sore elbow. Rosenthal, who plans to attend Warner Pacific College in Oregon, was followed by King Kekaulike’s Drake Onaga at 150 with Moanalua’s Brent Grant picking up the last of the top 15 individual medalist.

Onaga’s 1-under 70 was one of only four sub-par rounds. 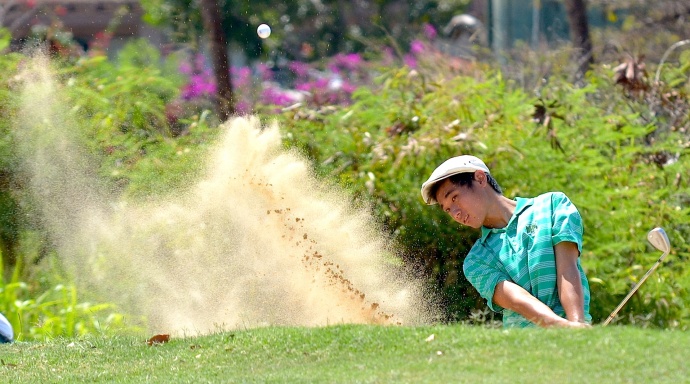 Mid-Pacific golfer Skye Inakoshi uses his sand wedge out of the bunker at No. 14 Wednesday at the Royal Kaanapali Golf Course. Inakoshi placed third in the boys individual scoring with a 36-hole total of 68—75—143. Photo by Rodney S. Yap. 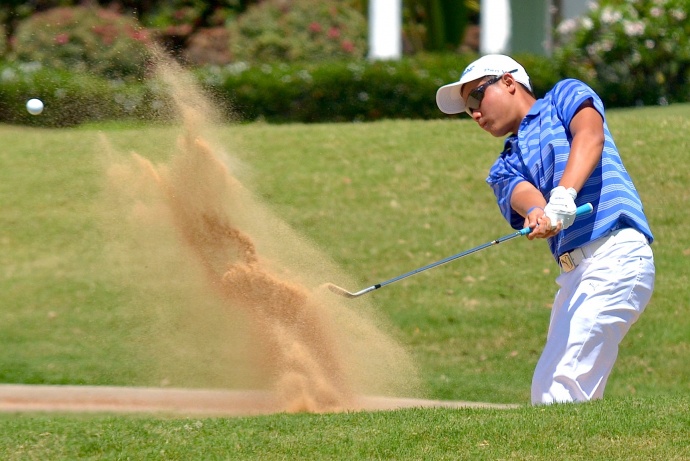 Moanalua’s John Oda hits out of the sand trap at No. 13. Photo by Rodney S. Yap. 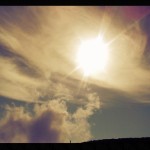 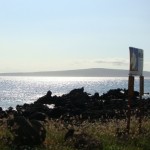