Maui police officers responded to a call about 12:24 p.m. Sunday, June 2, regarding a discovery of what appeared to be a grenade along the shoulder of Hansen Road.

The emergency ordnance disposal unit on Oahu was notified and authorities here were awaiting their arrival for proper disposal, according MPD Public Information Officer Lt. William Juan. Hansen Road was closed as of the morning of June 3.

Earlier in the year, authorities called in the emergency disposal unit to Maui on April 29 after finding a 2-foot unexploded piece of ordnance — near Hansen Road —  in a Puʻunene cane field.

The incident was reported about 150 to 200 feet east of the Old Puʻunene School within HC&S Field 707. The device was reported to authorities by an environmental management worker after it was discovered by crews conducting field plow work in the area.

That device was described as old, rusty, corroded, and cylindrical in nature, according to police reports.

Although material is typically taken to the Ukumehame Firing Range for demolition, “moving the ordnance presented a risk, so EOD dug a trench in the area and blew up [the April 29 device] there (on location in Puʻunene),”  police Capt. Clarence S. Kenui said. 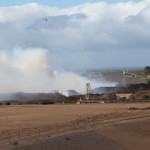 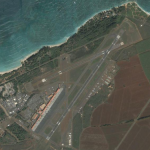