The Maui Department of Fire and Public Safety today announced the promotion of three individuals whose advancement took effect this week.

Clement Enomoto, Matthew Akiona, and Jesse Aloy, were all promoted to the rank of Firefighter II Hazardous Materials Specialist, according to the announcement.

Fire officials say all three men are being assigned to the C Watch of the Hazardous Materials unit out of the Kahului Fire Station.

Enomoto and Akiona are both seven-year veterans of the department, having spent their most recent assignment with Engine-10 out of Kahului, fire officials said.

Enomoto’s service history also included time spent on both Maui and Molokaʻi; while Akiona has worked at both the Nāpili and Pāʻia Fire Stations, according to authorities.

Aloy, meantime, has been with the Maui department for four years, after five years of service on Hawaiʻi Island, authorities said.  Fire officials say his time with the department included 3 months on Lanaʻi and the rest of the time at the Kahului fire station.

Inouye Posthumously Honored with “Spirit of the Warrior” Award 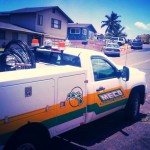