A sewage spill was reported at the public bathrooms at Lahaina Harbor on Saturday morning, officials said.

Police say the incident was reported at 8:58 a.m. on Saturday, June 29th by a caller who reported raw sewage coming from the location.

Responding officers found that sewage was coming up through the drains when the toilets were being flushed, said Maui Police Lt. William Juan.

The spill was contained within the restroom only, and none of the sewage escaped into the surrounding area or into the harbor, said Lt. Juan.

The area was cordoned off to block access from the public while crews responded to fix the problem. 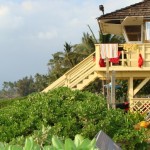