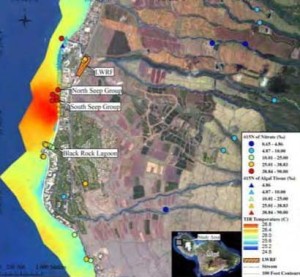 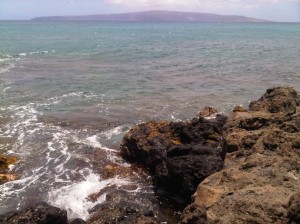 A final study has been released with data supporting claims that county wastewater discharge negatively impacted nearshore water quality, according to the environmental law firm, Earthjustice.

“This study confirms what we’ve been saying for years: wastewater injected at the Lahaina facility travels underground and ends up in the ocean offshore of Kahekili Beach, contributing pollutants to nearshore waters,” said Caroline Ishida, an attorney for Earthjustice.

As part of the study [2], researchers at the University of Hawai‘i placed dye into injection wells and then traced the path of the wastewater. 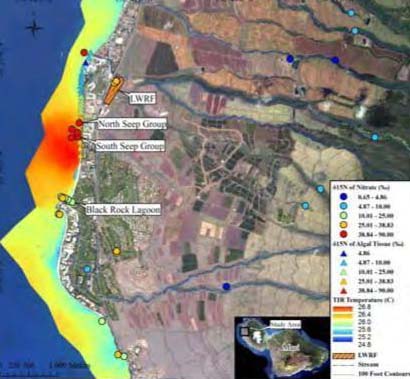 The tracer study test showed a “definite hydraulic connection between Injection Wells 3 and 4 and the nearshore waters near Kahekili Beach Park.” The study states that if calculations are correct, “64% of treated wastewater injected into these wells would be discharged from the monitored submarine springs.”

According to Ishida, the firm is currently engaged in settlement talks with Maui County, and is “trying to come up with a solution to this problem as quickly as possible.”

Officials with the mayor’s office responded today with a statement saying, “To the extent that the County is still in litigation in Federal Court with Earthjustice, we are unable to comment on their recent press release.”

Earthjustice initially provided written notice of their intent to sue on June 28, 2011. At the time, county officials responded [4] saying, “any talk of alleged violations is premature at best.”

The County of Maui Department of Environmental Management currently provides access to Wastewater Quarterly Reports, which summarize the county’s efforts in complying with federal decrees [5] and state laws to prevent sewer spills via online updates.

Earthjustice had filed a lawsuit [6] on behalf of several island groups in April 2012, claiming that wastewater containing bacteria and other pathogens from injection wells was making its way into the ocean.  The suit further claimed that the discharge was “contributing to algal growth, and harming the sensitive coral reef ecosystem.”

“This independent, expert report validates our longstanding concerns about the connection between the county’s injection wells and the ocean,” said Hannah Bernard, of the Hawai‘i Wildlife Fund in an Earthjustice press release, adding that the findings highlight “the urgent need to put an end to these discharges.”

Lucienne deNaie, of the Sierra Club, Maui Group also commented saying, “None of us has a crystal ball that can show us what impacts climate change and ocean acidification will ultimately have on our reefs. We need to solve the injection well problem to eliminate a source of pollution to our nearshore waters that we do have control over.”

Angela Howe, of the Surfrider Foundation, said she looks forward to coming up with a solution that reduces pollution for the benefit of those who use waters for swimming, snorkeling and other recreation.