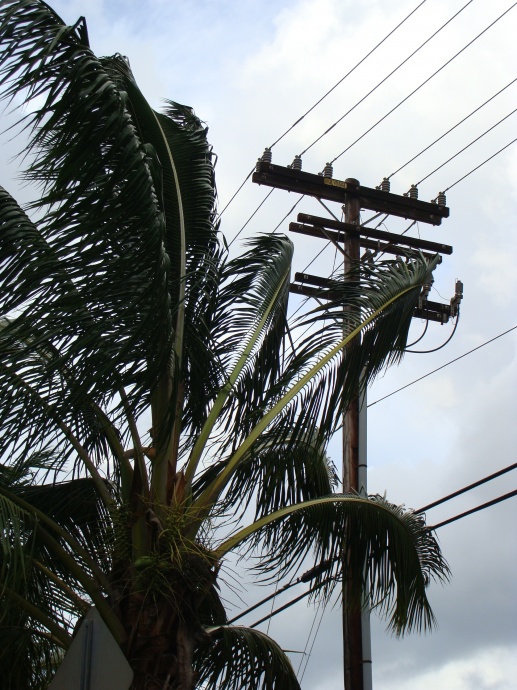 As of this time, all customers within Maui County have been restored to power.

Since Flossie passed over Maui on Monday, there were various outages affecting an estimated 10,000 customers.

The remaining 150 customers who remained without power last night have since been brought back online.

“Crews will continue repair work throughout the evening in an effort to restore electric service to the remaining 150 customers that are still without power,” said MECO spokesperson Kauʻi Awai-Dickson.

MECO officials thanked the public for their patience and workers who repaired electrical lines and replaced damaged transformers and downed utility poles throughout the day.

“We’d like to thank the public for their patience as we work to bring these last few customers back online,” said Transmission & Distribution Manager Joe Kentz. “Please know that we are doing everything possible to restore power as quickly and safely as possible.”

Maui Electric Company crews worked around the clock to restore power to customers following the wrath of Tropical Depression Flossie that left more than 9,800 customers without power yesterday. An estimated 500 customers remain without power at this time with restoration for at least the majority of customers expected sometime today.

As of 9:45 p.m. last night, power had been restored to about half of the customers initially affected. An additional 4,000 customers were brought back online by 3 a.m. on Tuesday. Lightning strikes to electrical equipment and fallen trees were found to be the cause of the outages experienced over the past 24 hours.

As of 4:30 a.m., there were still pockets of outages in parts of Makawao, Kīhei, and Keʻanae. According to MECO spokesperson Kauʻi Awai-Dickson, about 100 customers were still without power in the area stretching from Keʻanae to just outside of Hāna.

Hāna town is currently running on generators. As the day progresses, crews plan to address unreported incidents from overnight.

“Maui Electric crews restored power to the island of Molokai, which experienced an islandwide power outage at 7:40 p.m. Power was restored by 8:25 p.m. Preliminary assessments indicate the outage was caused by lightning strikes.

In addition, Maui Electric crews have been responding to storm-related outages in central and upcountry Maui, which initially affected a total of approximately 9,800 customers. The outages were reported after heavy rains and thunderstorms were reported in those areas. At this time, parts of Wailuku, and Waiehu to Kahakuloa remain without power. Small pockets of customers in Kahului, Haiku and Kula are also affected, In addition, storm conditions damaged power lines in Hana, cutting off service to approximately 900 customers in the area. Those customers are expected to remain out of power overnight.

At this time, about 4,500 customers on Maui remain without power.

On Hawaii Island, Hawaii Electric Light has finished restoring power to nearly all customers. Crews are continuing to restore power to a few customers on the east side of the island. Earlier today, outages caused by gusty winds affected customers throughout the lower Puna area. Any customers that are experiencing a power outage and have not contacted the company are asked to call Hawaii Electric Light at 969-6666 for assistance.

On Oahu, Hawaiian Electric has not yet experienced any storm-related outages. Crews are standing by to respond to any problems that may develop as stormy weather impacts Oahu.

Power interruptions and voltage disturbances are possible as long as stormy conditions persist. Do not touch fallen or low-hanging power lines or anything they may be in contact with. A seemingly harmless wire may still be energized. Stay clear of puddles where downed lines may have landed.

Call 911 in the event of an emergency. To report a downed power line or an outage,

As of 7:40 p.m., MECO reported the loss of power to the entire island of Molokai due to a lightning strike at the Palaau Power Plant. Power was restored by around 8:30 p.m., according to MECO officials.

Here on Maui, there are still outages in: Upper Olinda; Wailuku to Kahakuloa; Wailuku Heights; small pockets of Kahului; Spreckelsville to Kuau; a small area of Kula at Middle Road where a tree fell down; and Huleo to just outside of Hana Town where lines are down. The East Maui outage is expected to last overnight.

At 8:25 a.m., 20 customers in Piʻiholo including the County of Maui Water Treatment Facility, lost power when trees came down on power lines, said MECO Spokesperson Kauʻi Awai-Dickson.  She said repairs were complete and power was restored at 12:05 p.m.

According to Awai-Dickson, a second power outage occurred in Piʻiholo at 10:26 a.m. cutting off power to five customers in the immediate area.  Power was reportedly restored by 1:25 p.m.

A gust of wind is being blamed a brief power outage in the Kīhei and Wailea area at 9:04 a.m., causing electrical lines to swing together, officials said. According to MECO officials, approximately 2,000 customers were without power for nine minutes as Maui Electric crews cleared the lines and re-closed the affected circuits.

At 5:07 p.m., on Monday, July 29, 2013, another power outage was reported from Huelo to Hāna. MECO officials say they are working to identify the cause and restore electrical service as quickly and safely as possible.

At 5:04 p.m. on Monday, July 29, 2013, a power outage was confirmed in Central Maui at the following locations: Maui Central Baseyard, Puʻunēnē School, Ameron, Walker Industries, Maui Landfill, and Camp 5 field office. MECO officials say they are working to identify the cause and restore electrical service as quickly and safely as possible.

MECO issued a reminder fro the public to stay away from downed power lines and to call Maui Electric or 911 immediately for assistance. 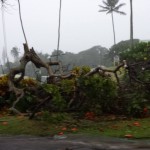 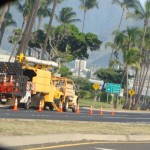 Governor Authorizes Directors to Determine Release of Employees Due to Flossie