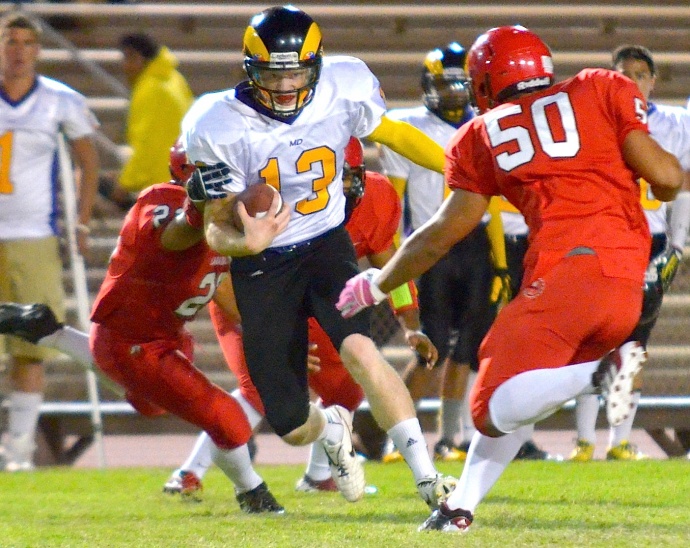 The Lahainaluna High School football team utilized its first-round bye Saturday to notch its eighth shutout in 13 games, this time against a high-powered offense from Vancouver, British Columbia.

“That was the best varsity team we have ever played,” Mount Douglas Rams head coach Mark Townsend told sportswriter Howard Tsumura of The Province in today’s edition.

Townsend’s players and coaching staff shared his sentiments during the post-game meal with the host team following the Lunas’ 28-0 shutout of the defending AAA champions from B.C.

“The effort was there, but we lacked execution offensively in key moments in the game,” Townsend reportedly told Tsumura. “Our early-season rustiness showed in some areas but their defensive front was outstanding.” 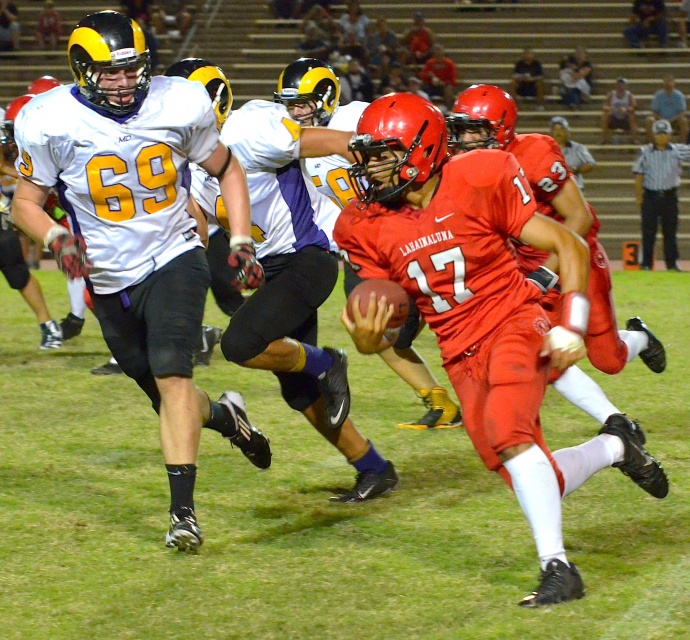 The Lunas’ defense, led by Hercules Mata’afa, Connor Mowat, Bronson Kaina and Kiko Taylor Kolher-Fonohema, sacked the Rams’ 6-foot-7 quarterback Ashton MacKinnon three times and limited the B.C. province’s player of the year Marcus Davis to 118 total yards on 10 touches, 106 yards below his total offense average per game from a year ago.

“It took us awhile but once we were able to slow them down we were OK,” said Lahainaluna co-head coach Bobby Watson, who also doubles as the team’s defensive coordinator.

Not only did the Lunas effectively kick and punt the ball away from Davis, they were also successful in containing him as a running quarterback in the “wildcat” formation, where he netted just 84 yards on 11 carries. 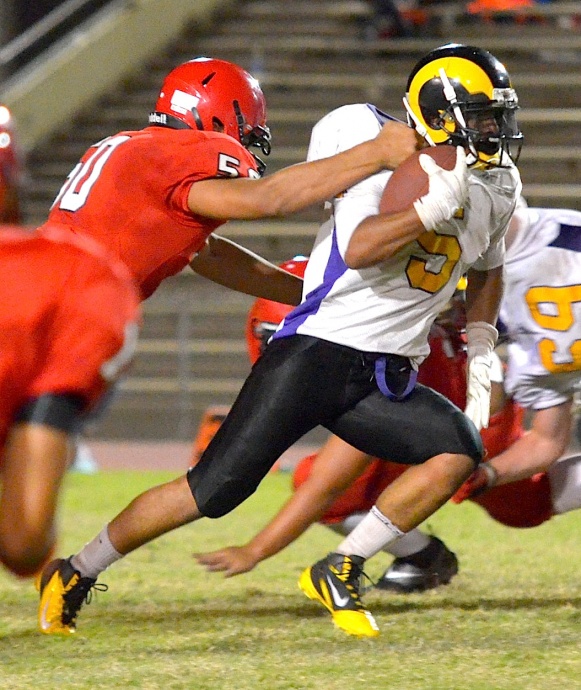 “At half time we made some small adjustments to deal with that,” Watson noted. “Basically they had to get the ball into his hands by either throwing it to him or handing it off. We knew we had to stop him and if we stopped him we would stop their offense.”

Watson added: “I don’t think they were expecting the kind of speed they saw in Herc, or the kind of strength they saw in Connor. . . . It was a good workout for our offense and defense. We needed to polish up some stuff.”

The Lunas improved their 2013 record to 2-0 and open the Maui Interscholastic League regular season Saturday against Kamehameha Maui, beginning at 7 p.m., at War Memorial Stadium. The Warriors posted a shutout of their own Saturday, beating Division II neighbor King Kekaulike 29-0.

“We still have a bunch of things that we need to improve on, but a game like this is good for our confidence. To go against big guys like they had, and with a running back of that caliber, being able to slow him down like we did is good for us. 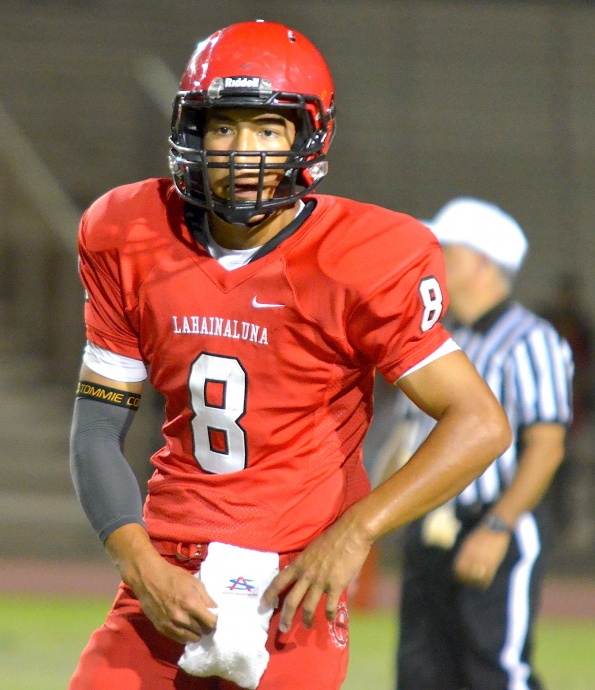 Lahainaluna quarterback Makoa “Sione” Filikitonga looks to the sidelines for the offensive next play. Photo by Rodney S. Yap.

“This week we should be ok as we get back a couple of kids that should be starting for us,” said Watson of Pousima Galoia (6-4, 350), Justin Hong (6-2, 280), and Peni Taufa, the younger brother of Feleti Taufa who earned a walk-on invitation at University of Hawaii after the 2011 season.

Galoia is a returning starter and a senior; Hong is a junior, who was one of three Lahainaluna sophomores to be named a first-team MIL all-star by The Maui News last season; and Taufa, now a junior, was a 6-foot-1, 175-pound freshman on the junior varsity roster the last time he played in 2011.

Both Hong and Taufa, Watson said, recently transferred back to Lahainaluna from the mainland.

“Those three linemen have worked their way back into the starting lineup and that should give us a little more depth and help us to relieve the kids we currently have going two-ways.”

Watson said he likes the direction the team is going as long as it continues to improve.

While Watson defers to co-head coach Garret Tihada on offense, he noted: “We have to get a couple of more kids involved.” 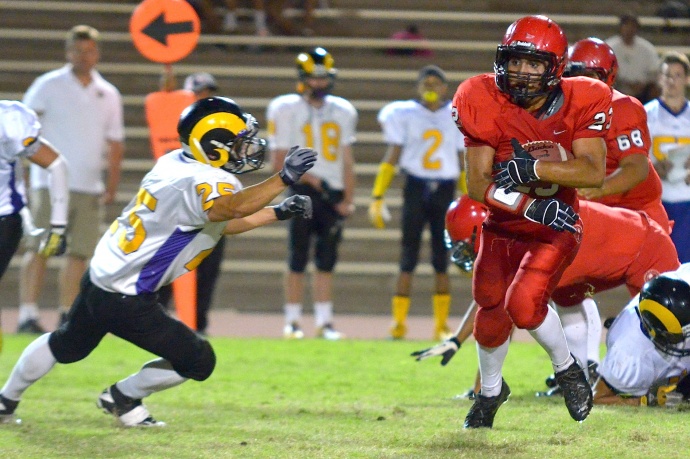 Defensively, less can sometimes mean more, Watson explained. Especially when it involves two of his captains making the defensive calls.

“A lot of times guys like Kiko are trying to do too much. He needs to not be overburdened by thinking he has to carry the team on his shoulders when he’s playing defense. He’s alway trying to do more than he needs to do. It will come as he gains confidence in the people around him.

“He and Bronson on defense are calling the coverages. They both need to relax a little bit and enjoy the game, and I think they will be much better players. Because the bottom line is it’s still a team effort.” 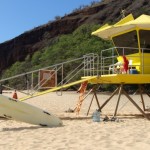 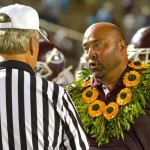