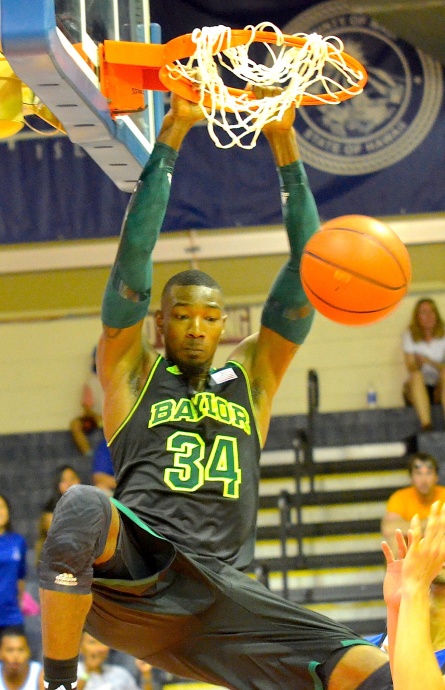 Like a maestro composing a classical three-point masterpiece, Chaminade’s Christophe Varidel finished one point shy of shredding 30 years of college basketball wizardry in Monday’s opening round of the 2013 EA Sports Maui Invitational Tournament at the Lahaina Civic Center.

Varidel’s 31 first-half points was the hot topic on Twitter as the 23-year-old transfer from Florida Gulf Coast buried seven of the Silverswords’ 11 3-pointers in the first 20 minutes.

“The first half, I kept thinking about the words ‘Maui Magic’ because Christophe was definitely on fire,” said Baylor coach Scott Drew.

Despite Varidel’s hot hand, the 17th-ranked Bears managed a 3-point lead, 50-47, at halftime and relied on their superior length and deep bench to pull away early in the second half en route to a 93-77 victory.

“I’ve been at Baylor 11 years, and I don’t remember,” said Drew when asked if he could recall any player having a bigger half than the 6-foot-2 Chaminade guard. “Cory, you’ve been here five, Gary four, do you guys remember?”

Cory Jefferson and Gary Franklin both answered: “No, I don’t think so.”

“I think when we told the guys on the bench he had 31, we were like we knew he had a lot, but that’s crazy,” Drew said.

Chaminade’s Christophe Varidel works off a screen from teammate Tyree Harrison (11) as he tries to get open against Baylor on Monday. Photo by Rodney S. Yap.

Varidel finished with 42 points which was only one short of the Maui Invitational record of 43 scored by Gonzaga’s Adam Morrison in 2005. The sharp-shooter’s 10 3-pointers tied the tournament record of Norte Dame’s Kyle McAlarney set in 2008 against North Carolina. Varidel finished 10 of 16 from beyond the arc and 14 of 29 overall.

The Bears enjoyed their fifth straight win (5-0) and advanced to the semifinals against Dayton, which upset No. 11 Gonzaga 84-79. No. 8 Syracuse will face California in the early semifinal at 2 p.m. Hawaii time today, while Baylor meets Dayton at 4:30 p.m. Both games will be televised live on ESPN television and ESPN 550AM radio.

In Monday’s other games, Syracuse defeated Minnesota, 75-67, while California knocked off Arkansas, 85-77.

Franklin hit six of 10 treys and scored a career-high 22 points to lead Baylor. Cory Jefferson had 15 points and nine rebounds, including an alley-op dunk and layup early in the second half that game Baylor its first double-digit lead over Chaminade (2-1). Brady Heslip had 14 points and Royce O’Neale added 12. 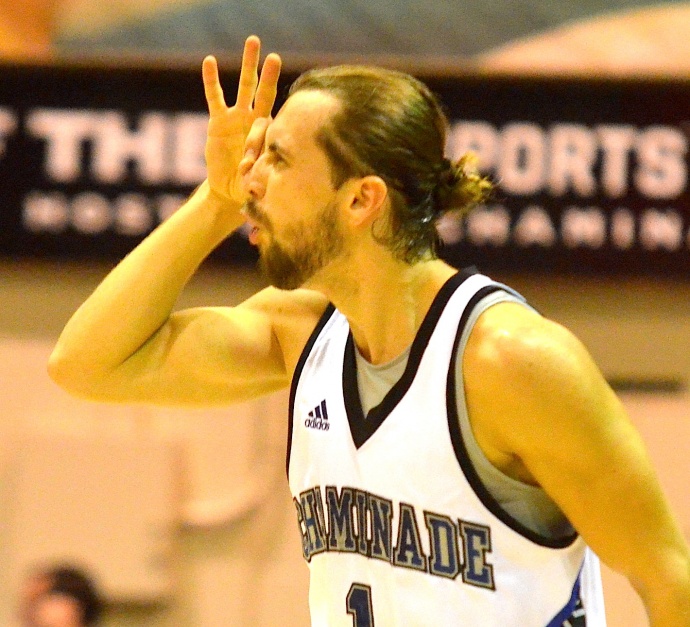 Chaminade’s Christophe Varidel gestures to the Silversword supporters after knocking down one of his 10 3-pointers Monday against Baylor. Photo by Rodney S. Yap.

“We saw on film that they shoot the ball very well. We wanted to get out and contest every shot,” Franklin said. “We didn’t expect it at all, but we made the adjustments we needed to win.”

The 16-point win was Baylor’s most lopsided win so far this year.

The Bears shot 50% from the field, including 11 of 25 3-pointers, while also hitting 20 of 27 free throws. With Rico Gathers grabbing a career-high 14 rebounds, the Bears dominated the boards, 51-31. Baylor hit nine of 12 treys in the first half including four of five by Franklin and three of four by Heslip.

“I think that’s what makes you a good team is having balance,” said Drew. “If a team tries to focus on the interior guys, we’ve got unselfish guys and they can definitely be more capable of knocking down shots and making plays. I think our perimeter opens it up for inside guys as well and that’s why they’ve been able to be successful. You can’t win unless you’ve got a good balance, and we feel good about our balance.” 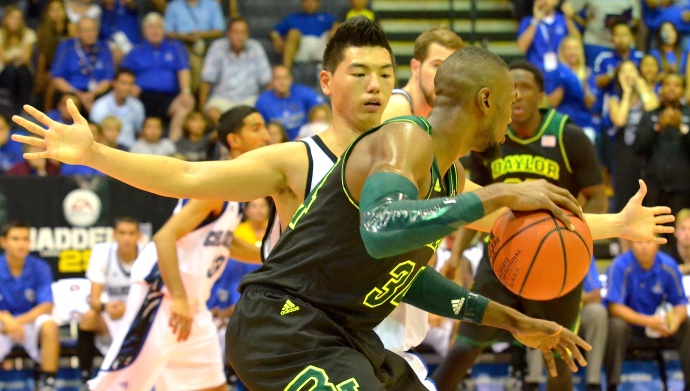 “I thought we played really well for about 33 to 35 minutes of the game,” said Chaminade head coach Eric Bovaird. “Obviously, you guys know there was a stretch in the second half there where we couldn’t buy a basket and that kind of put us in the hole. We were able to battle back a little bit there towards the end, but that one bad stretch, I don’t know the exact minutes, but we had a hard time scoring. They were advancing the lead.

“I am proud of the guys, they played tough. Christophe’s a great kid and to get the 3-point record in a tournament like this is really something. I wanted him to have a shot. . . . As soon as I found out that he was close to a record I just looked at him and said, ‘you want to go back in?’  And he said, ‘yeah, sure.’ He very easily could have said no, my knees are killing me.”

“It was a great opportunity to set a record like that. If I think about all the players I’ve watched in this tournament . . . there have been some great shooters and he’s up there with the best of them,” added Bovaird.

Varidel helped Florida Gulf Coast reach the Sweet 16 of the NCAA tournament last season before transferring to Chaminade (2-1) for his senior year.

“They were a little bit tougher denying the ball,” said Varidel about Baylor’s second-half defense. “I think I had at least three or four shots on just the hand off. 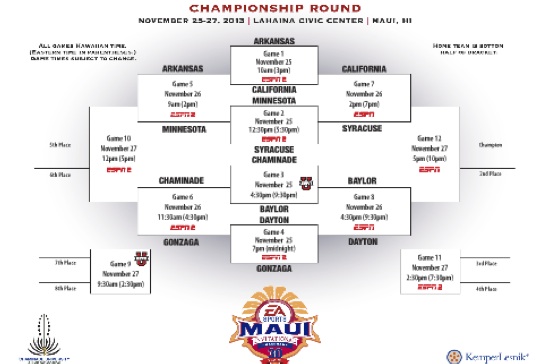 “I wanted the W tonight, that’s for sure. But I’m really thankful to play for coach Bovaird because I know he has huge confidence in me, and that’s something I don’t think I had in my previous years of college basketball. The coach always told me not to dribble too much or just catch and shoot, and not more than one or two dribbles. I always knew I could do a little bit more. But since coach Bovaird has confidence in me, it’s really easy to relax and just play my game.” 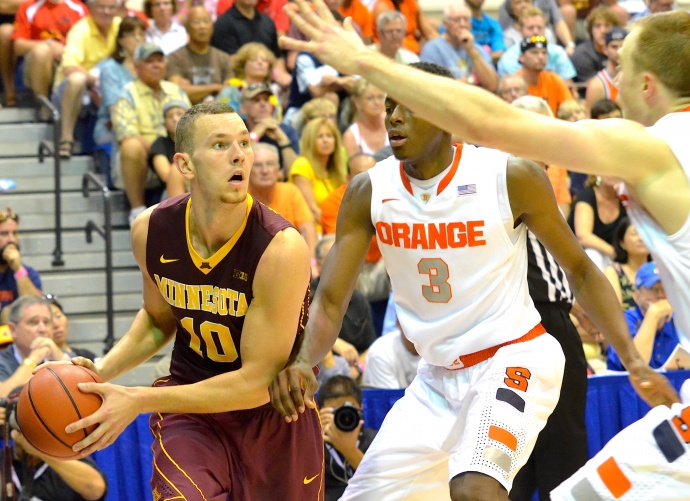 C.J. Fair scored 16 points and had 10 rebounds as Syracuse earned its fifth straight win (5-0) by holding off the stubborn Golden Gophers, who pulled within 67-65 with little more than two minutes left.

Minnesota (5-1), however, committed four turnovers in the final two minutes, scoring only once more when Austin Hollins hit a meaningless layup in the game’s final moments.

Trevor Cooney scores 15 points all on 3-pointers, while Tyler Ennis and Jerami Grant scored 12 points each. 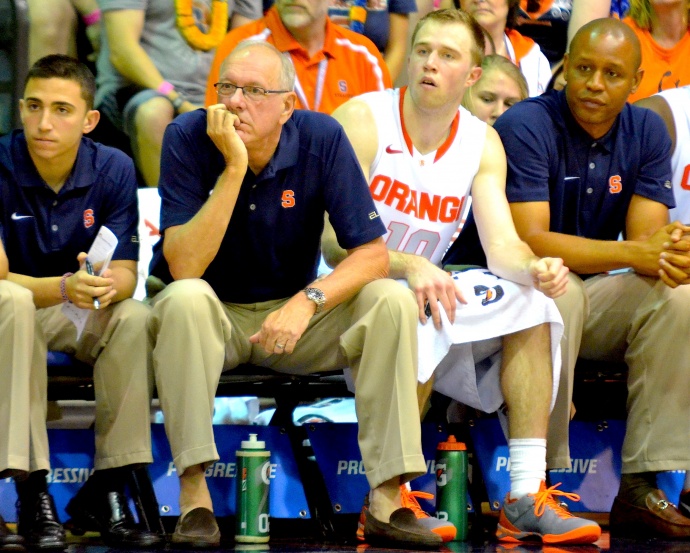 “Yeah, they had a very tough defense,” said Syracuse head coach Jim Boeheim. “They pressured the guards, and then they forced you into the bigs, and their bigs were playing solid, strong, Big Ten basketball.  We just had to fight through it.  We had to adjust to how the refs were calling the game.”

Malik Smith had 16 points for Minnesota.

The Bulldogs (4-1) outscored opponents by an average of 21.8 points in winning each of their first four games in Spokane, but found the going much tougher across the Pacific Ocean on Monday.

Guard Kevin Pangos had 27 points and Sam Dower added 18, but both players — along with starting center Przemek Karnowski — fouled out. Pangos picked up his last foul in the final minute and was unable to contribute to the last two possessions.

”I just kind of blanked (out) there,” said Pango. “Some of the coaches were telling me. That was my fault.”

The Bulldogs, who led by as many as 16 in the first half, shot just 5 of 19 from 3-point range. Kyle Dranginis had an open 3-pointer roll around the rim that would have tied the score in the final seconds. Gonzaga was also out-rebounded 40-29, including 18-5 on the offensive glass. 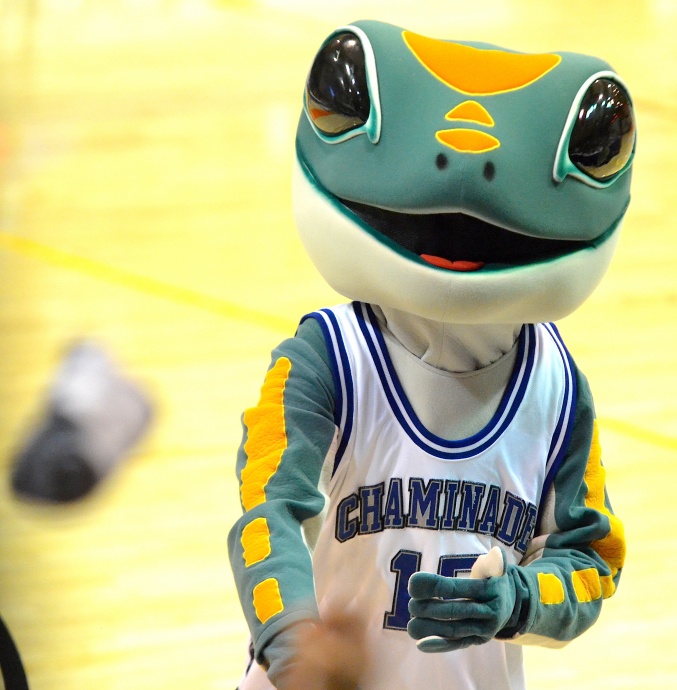 The Chaminade mascot was busy tossing t-shirts into the stands Monday. Photo by Rodney S. Yap.

”We were battling foul trouble all game long so we had some strange lineups and scenarios out there, but Dayton did a great job staying with the game and they handed it to us,” said coach Mark Few, whose team won the 2009 Maui Invitational.

David Kravish had 19 points and 15 rebounds and Ricky Kreklow scored 17 points off the bench, and three others scored in double digits for the Golden Bears (5-0).

Arkansas led only twice — once in the third minute of play and again at 35-34 after Michael Qualls made a 3-pointer to open the second half. The Bears responded with a 13-4 run in less than three minutes.

Freshman Jabari Bird led the Bears in scoring for most of the game before finishing with 15 points. Justin Cobbs also scored 15, and Richard Solomon scored 11 points and grabbed seven rebounds. 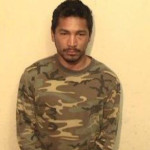 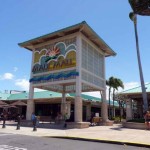