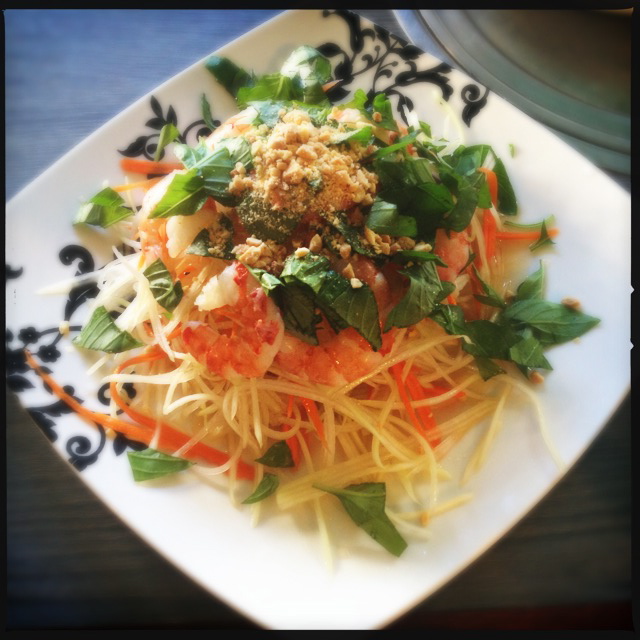 Every so often, readers send in review requests or recommendations as to “the best [fill in the blank]” –  a gesture we very much appreciate.

After three such endorsements for Pho Saigon 808 in Lahaina, we caved to the pressure and checked it out in person.

Surveying the menu, the high-level first impression is “authentic lite.”

We stuck to the most traditional dishes available. 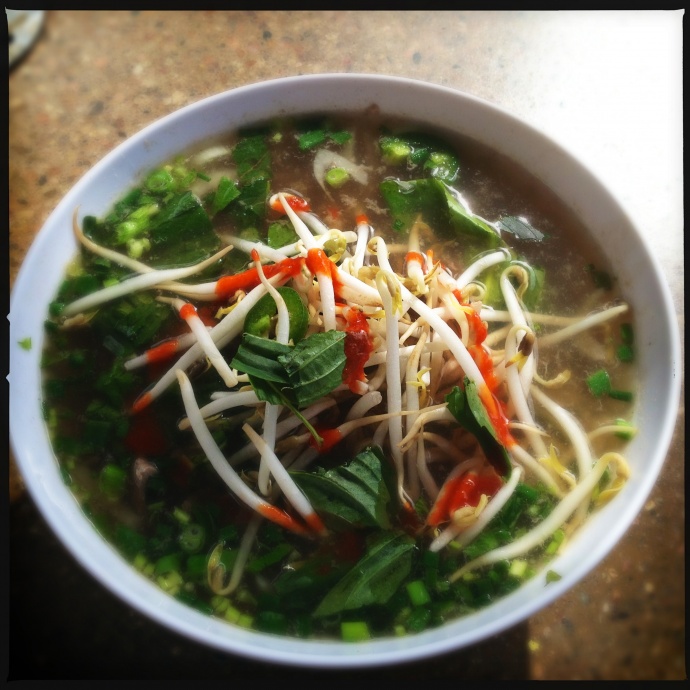 There was more carrot than usual, but happily, it didn’t add too much unnecessary sweetness. Topped with seven half-shrimps, the dish is fresh and clean, although in need of a little heat.

Although there wasn’t any Nước chắm (a condiment made from chili peppers, lime juice, sugar, garlic and – of course – fish sauce. It’s spicy, sweet, fishy and sour and accompanies pretty much every Vietnamese meal, every day) available, bottles of Sriracha grace each table. After adding an ample squeeze of the beloved rooster sauce to our salad, it was perfect.

Vegetarians will be pleased to note that almost every item on the menu – including the papaya salad (and presumably without the fish sauce) – is offered with a tofu variation.

Proximity. Imperialism. Colonialism. The causes vary, but you can’t get too far in Vietnam without bumping up against somebody else’s culinary influence. 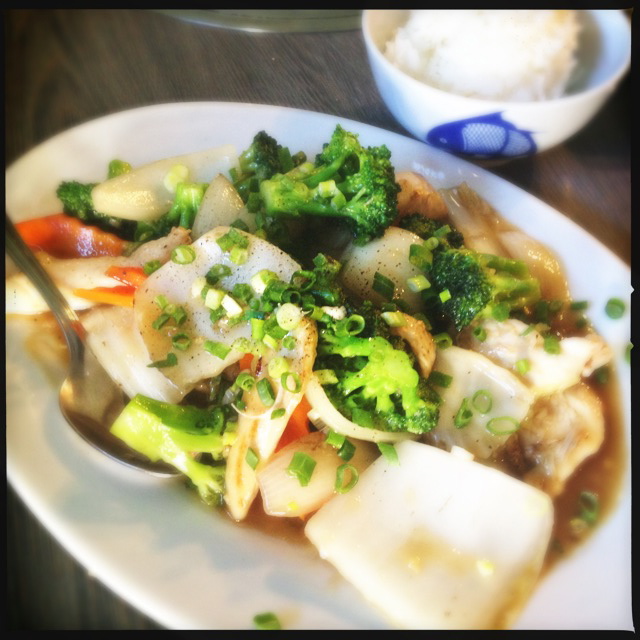 In that vein, the restaurant’s namesake soup is believed to have originated as part of French colonialism. The resulting dish is a seamless intermingling of Vietnamese basics and European meat broth techniques.

The restaurant offers just four varieties of pho – one made with tofu – and we opted for the most exotic: the Rare Steak, Meatballs and Tripe ($12.95) version.

The soup is nuanced and flavorful – definitely one of the better versions on Maui – but strangely… Greasy.

Once we received our food we were all but abandoned, largely due to the lure of the TV. On all three occasions, at least two members of the staff were seated in a booth near the bar and glued to Food TV like a cat on a laser light. 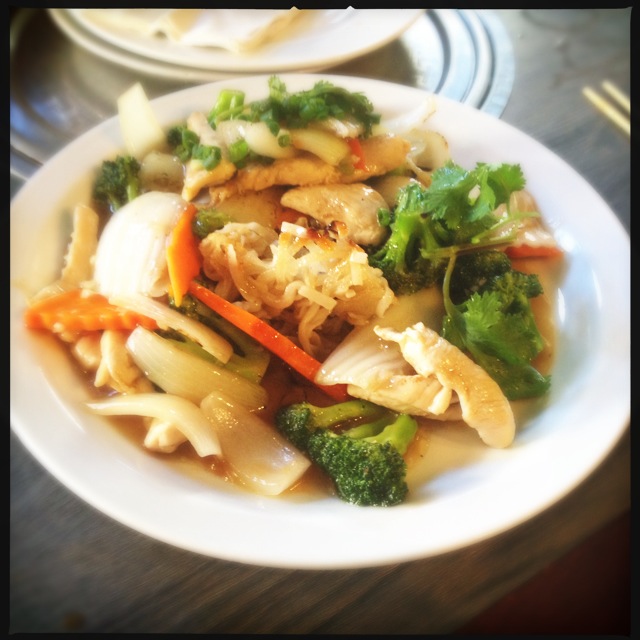 We’re not certain how much Rachel Ray or Guy Fieri knows about making Bánh mi or Bánh xèo (neither of which is offered here, unfortunately), but don’t be too surprised if the staff ever utters the phrases “yumm-o” or “Flavor Town.”

The food of northern Vietnam is heavily influenced by China and as you head south, the inspiration of Thailand and Cambodia – coconut, palm sugar and even taro – takes hold.

Clearly Pho Saigon 808 takes its influence from the northern region.

That stated, the very Chinese-esque Chicken Wok Dish ($12.95) is enjoyable, if a bit a bland.

Reminiscent of cashew nut chicken sans the cashews, there is a notable garlic finish. 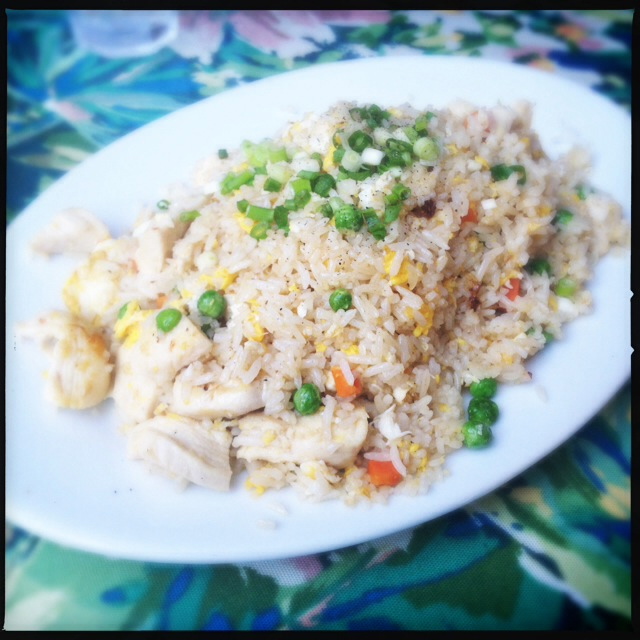 The Fried Rice with Chicken. Photo by Vanessa Wolf.

In addition to breast meat, plenty of broccoli pieces, carrots, onion, won bok and scallions intermingle and are accompanied by a small bowl of rice.

It’s a safe bet for anyone hoping to stick with mild, familiar flavors.

The Chicken Wok Soft Noodle ($12.95) turned out to be pretty much the exact same dish… on top of some noodles.

We usually associate Vietnamese food with rice noodles, but Pho Saigon 808 is blazing new territory in that regard.

It wasn’t quite what we were expecting: more like a house cake noodle. The fried block of egg noodles are covered in chicken, vegetables, cilantro and a mild gravy.

Rather than the tinier chunks in a traditional house cake noodle preparation, we found the giant slab a bit hard to manage. 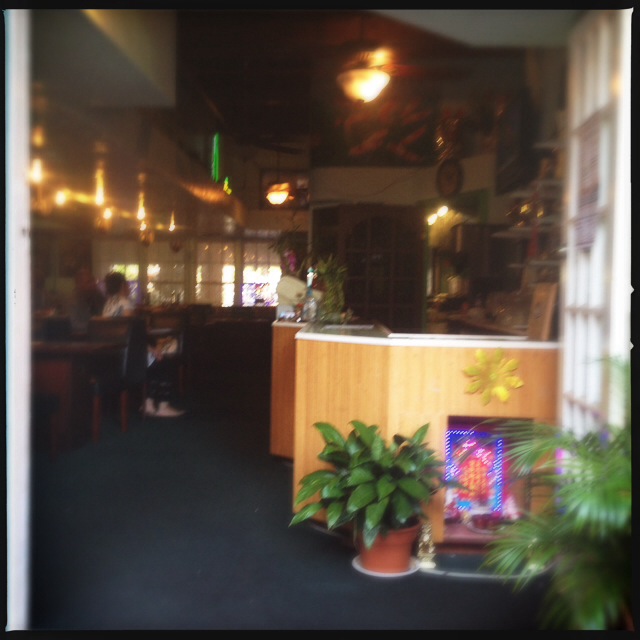 The interior of the restaurant as seen while dining outside. Photo by Vanessa Wolf.

Still, the dish is pleasant and mild in a quintessential “comfort food” way.

Last up, on two strong recommendations, we tried the Chicken Fried Rice ($10.95).

The menu mentions it’s fried in oil AND butter, and the double-decadence shines through.

Ideally, stir-fried dishes like fried rice have a deep, smoky flavor known in Cantonese as wok hei—the breath of the wok. That’s not the case here, and the net result – although pleasant – is a bit meek. In the same vein, there isn’t much Chinese food available on Maui, so we won’t contest the “best fried rice” accolades others have bestowed. Yes, it’s simple, but it works.

Tucked in the back of Lahaina’s Wharf Cinema Center between Jay’s Place and Amigo’s, the food offered at Pho Saigon 808 isn’t exactly reminiscent of enjoying authentic flavors on Dong Khoi Street. Nonetheless, if you’re looking for reliable Vietnamese basics, you can count on them for freshly prepared standards. 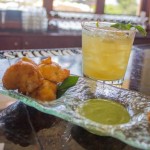 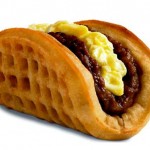