The turtles were born on the fourth of July, and joined a group of six one-year-old juvenile turtles on Maui on August 21, as part of Sea Life Park Hawaiʻi’s green sea turtle education loan program.

The program is geared toward education, conservation, and the enhancement of the public’s awareness of the ocean and its inhabitants.

Aquarium curators say each of the turtles weighs a little over 3 ounces each, and will be rotated two at a time on exhibit throughout the day.

Green sea turtles have been an integral part of the facility’s education program since opening its doors to the public in 1998, according to curators. 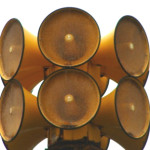