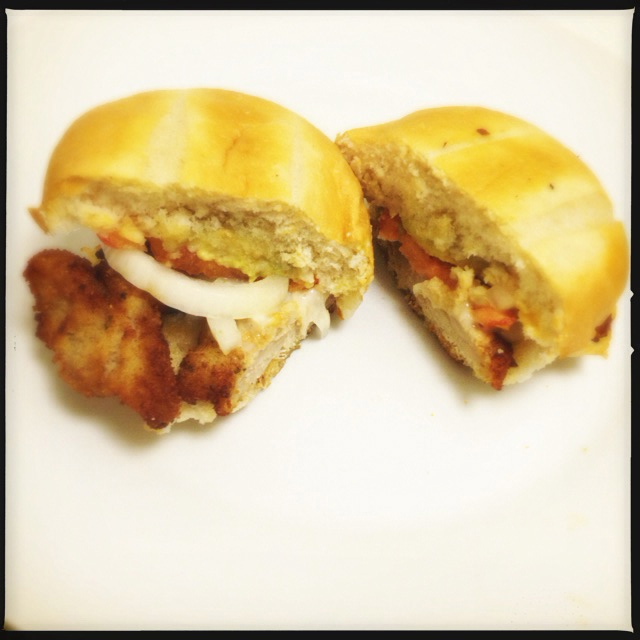 Let’s get this straight. On an island with plenty of Mexican options already, you open yet another one with a predominant focus on just one thing: tortas.

The Mexican sandwich – which the restaurant explains are known as  “tortugas” (turtles) in Mexico City – is traditionally assembled on a bolillo roll and topped with a whole bunch o’ stuff like avocados, beans, onions, tomatoes and meat.

Right out of the gate, Tortugas is playing by the rules.

The Milanesa ($9.99) arrives on a soft, fresh bun. The breaded chicken thigh is pounded thin and fried to a crisp outer crunch. It’s then topped with slices of avocado, tomato, jalapeno and Maui onion, a schmear of refried beans, a sprinkling of oaxaca cheese and… Wait. 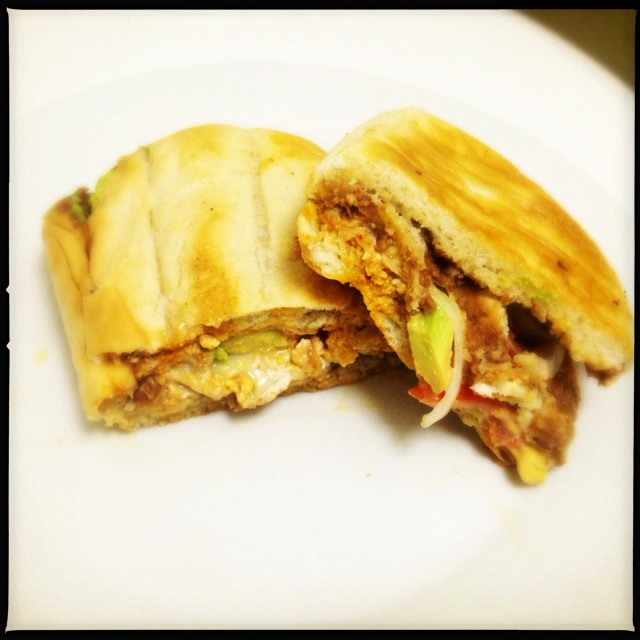 The Suiza Torta. How often do you have a refried bean sandwich? Photo by Vanessa Wolf

How could we have overlooked the presence of chipotle mayo on the ingredient list?

The new millennium’s answer to “secret sauce,” this stuff creeps into everything these days.

We love jalapenos, but cremate them into the chili pepper equivalent of a raisin, call them chipotles and count us out.

The resulting flavor is powerfully smoky and easily overdone. Such is the case here and that’s too bad, because everything else about the messy, drippy, crispy, giant sandwich was spot-on.

Chipotle Mayo, you killed my father. Prepare to die. 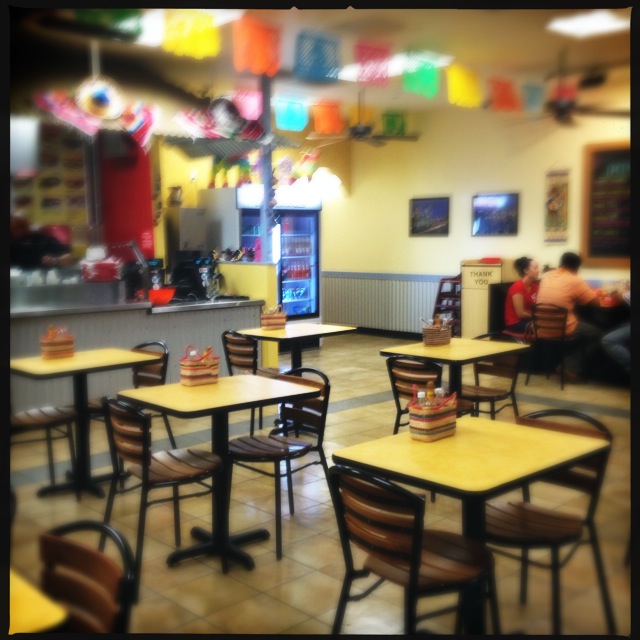 Once again, a deluge of chipotle mayo put the remaining ingredients in a choke hold and slowly suffocated its delicate roommates to death.

The resulting mess is soggy, slippery and smoky as all get out.

Another ‘so close and yet so far’ moment.

So we gave it another moment.

Turns out – as we suspected – the sandwich of beans, avocado, tomato, onions and cotija and oaxaca cheeses (hold the chipotle mayo) is pretty tasty. Add some rajas con crema (poblano pepper slices cooked in cream) or caramelize the raw onions and this could be a knock-it-out-of-the-ballpark moment.

Tortugas is located in the Maui Mall and opened in April of this year. The staff is friendly and knowledgeable and the space itself is bright and inviting with a fast food vibe. 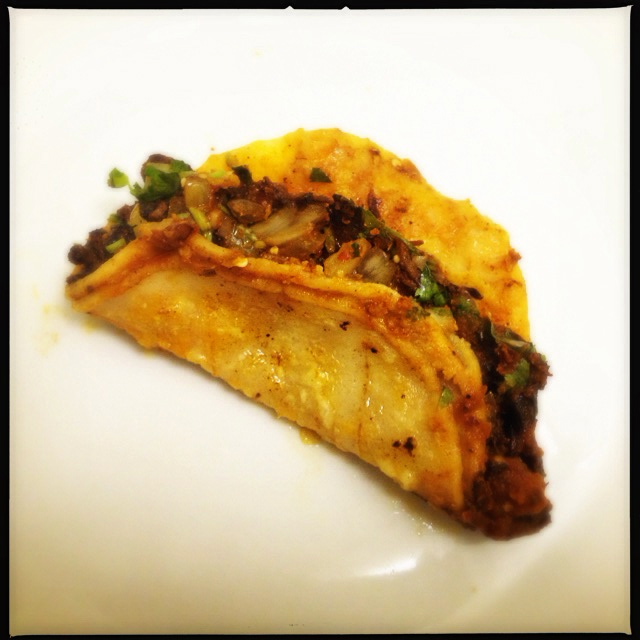 The Birria Taco. Consider a bib. Photo by Vanessa Wolf

But this ain’t no Subway. Expect your torta sandwich to take about 15 minutes to create.

On our initial visit, Tortugas was flying in the face of their “all tortas all the time” messaging and selling burritos, which have since been dashed completely in favor of tacos.

Perhaps not surprisingly, they too are fresh, daring and hella messy.

The flavors of the Birria Taco ($2.25) take us straight to Bombay.

Often (but not in this case) made with goat, birria gets its (other) distinctive taste from achiote paste. Dense with Mexican oregano, cumin, cloves, cinnamon and allspice, the flavors of achiote are reminiscent of Indian curry or even chutney.

Garnished with raw onion and cilantro, the taco is unusual, bold and definitely worth a try. 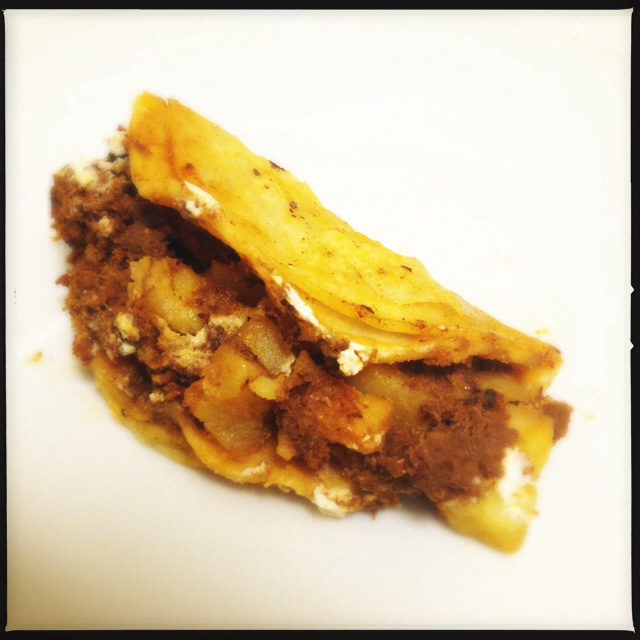 The Chorizo and Potato taco. Photo by Vanessa Wolf

Similarly, the Chorizo and Potato Taco ($1.99) is packed with flavor.

A combo typically associated with breakfast, the potatoes help to mellow the intense punch of oregano in the chorizo. Similarly, the taters are imbued with a rich, meaty flavor.

The tacos come on a small – four inches across – double corn tortilla. They are a bit uneven – handmade? impressive. – and inclined to suck up grease, but filled to the brim and a pleasing vehicle for the meats inside.

The Poblano Peppers and Corn Taco ($1.99) had us halfway sold by the name alone.

If corn didn’t lack essential nutrients to live on, we could live on corn. 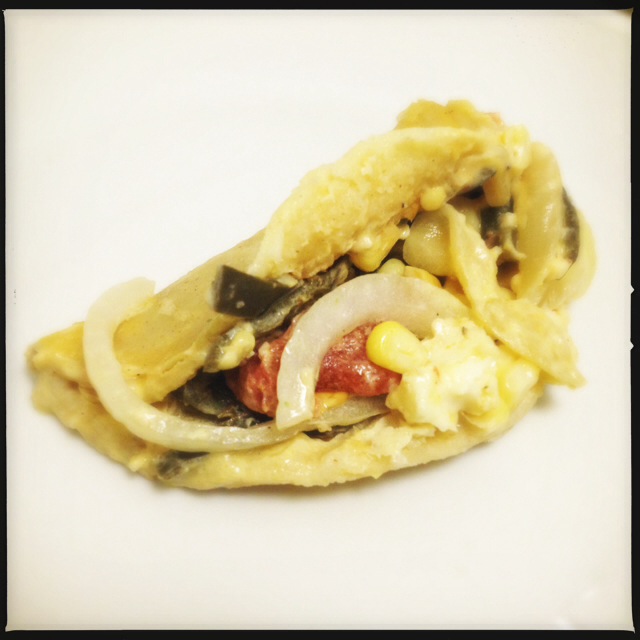 We loved pretty much everything about this Poblano and Corn Taco. Photo by Vanessa Wolf

And it just got better from there, causing us to question the very universe.

Is this the real life? Is this just fantasy? Is this the world we created? Is this all in my head? Is there anybody out there?

Admittedly, maybe that’s a slight exaggeration, but the corn and pepper mingled in a cream sauce in a way that made us smile.

We could have done without the slices of cooked tomato, but found this unique vegetarian option a delight nonetheless.

We don’t know if the tacos will go the way of the burritos – i.e. gone for good – but we hope not. 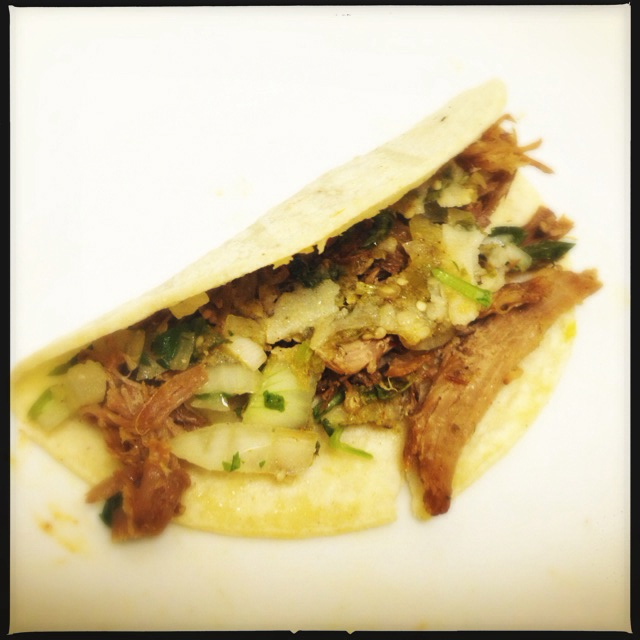 As a final hurrah, we returned to face the Cubana Torta.

Is this a play on the Cuban sandwich of buttered bread stuffed with dill pickles, roast pork, ham, and Swiss cheese?

Right away, the oregano-heavy (homemade?) chorizo hits the tastebuds first, followed by the burn of the pickled jalapeno peppers. Thankfully we remembered to hold the (yep. Seems it’s in everything.) chipotle mayo and avoid a full oral Hiroshima.

Say hello to the Sloppy Jose (or Fidel, for that matter). 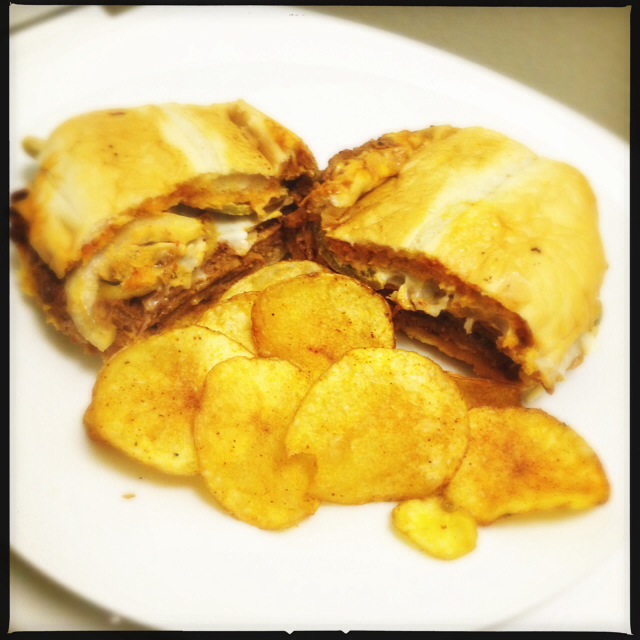 The Cubana Torta presents both a flavor explosion and a potential “clean t-shirt no more” explosion. Photo by Vanessa Wolf

Tortugas has decided to make their focus one slim faction of Mexican cuisine (with a few temporary forays into some others) and it’s safe to say they’ve brought out the big guns with the Cubana.

If you find yourself in the mood for something filling, flavorful, affordable and slovenly enough you’re in danger of wearing a large portion of it home, head directly to Tortugas.

Bibs (or a large, body-covering shell of some kind) optional. 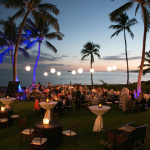 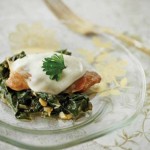