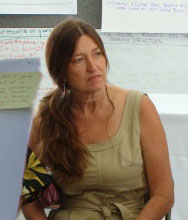 Helen Nielsen during a discussion on the reWailuku initiative in 2013. File photo by Wendy Osher.

Maui’s Helen Nielsen and Ernest Wilson, Jr., were among the list of nominees named by Governor David Ige to fill posts on the University of Hawaiʻi Board of Regents.

Nielsen is currently serving on an interim basis. Upon confirmation, she will serve the remainder of her term which ends on June 30, 2015.

“Nielsen has a passion for community service and environmental sustainability,” the Governor said in a press release announcement.

She was a founder of the Maui Coastal Land Trust, and is co-owner and manager of commercial properties in Wailuku om Maui and Waimea on the Big Island of Hawai‘i.

She studied business at Kingsborough Community College and at Pace University in New York.

“Wilson is a seasoned executive with more than 50 years of experience in the fields of travel, hospitality, food service, military logistics, and higher education,” the Governor’s announcement stated.

All of the appointments are subject to state Senate confirmation.

In making the announcement, Gov. Ige said, “Our UH system comprises 10 campuses that provide educational and research opportunities for many Hawai‘i students and faculty throughout our state.  As such, we chose candidates with a breadth of experience who will represent my desire for the Regents to focus on ensuring long term sustainability of our sole public institution of higher education.”

“This is an exceptional group of leaders with a range of diverse skills and expertise in the operations of large organizations,” Ige said in a press release announcement.  “I am confident they will contribute to the continued success of the University of Hawai‘i system.” 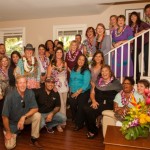 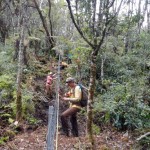