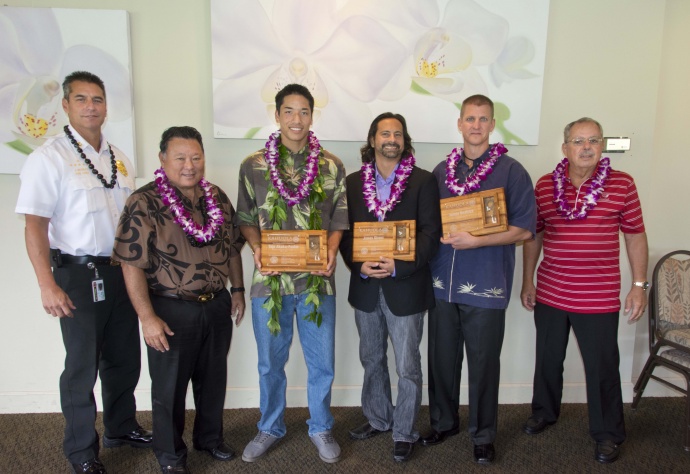 Three Maui residents were honored with the Maui Fire and Public Safety Commission’s Kahuola Award for separate acts of heroism reported between February and October of 2014.

Deputy Corporation Counsel James Giroux was involved in a tragic plane crash on the island of Lānaʻi on Feb. 26, 2014, which involved five County of Maui employees and the pilot of their chartered plane.

“Although sustaining injuries from the crash, Giroux managed to pull two of his coworkers from the burning plane, saving their lives. He also contacted emergency services personnel and directed them to the area of the plane crash,” fire officials said in a press release.

“Mr. Giroux, acting without regard for his own safety, returned to the wreckage not once, but twice, to rescue and render assistance to his injured colleagues. His actions that day were truly heroic,” said Gen Iinuma in his nomination.

On July 27, 2014, 15-year-old Taje Akaka-Foster witnessed an elderly man fall into the ocean off of Kamaʻole Beach Park. Fire officials say Taje Akaka-Foster, with the assistance of his younger brother Chayce, managed to pull the struggling man out of the water and onto the rocks where another witness performed CPR on the victim.

“Taje demonstrated skill and courage while performing this selfless act. His actions gave this man, a complete stranger, every chance for survival,” said Fire Fighter Jeffrey Robson in his nomination.

The final recipient of this year’s award was Fire Fighter II James Owen Deatrick, who was off-duty on Oct. 4, 2014 when he witnessed a brutal stabbing at his housing complex. Fire officials say Deatrick subdued the assailant and provided medical attention to the victim until the arrival of emergency services personnel.

“We are pleased and proud to recognize these three outstanding citizens that took action to save another’s life,” said Fire and Public Safety Commission Chair William “Butch” Soares in a statement.  He continued saying, “It shows that we have caring, positive-action members within our County and honoring them is a small reward for their actions. Three young men with great values and sense of being.”

“The Department lauds these heroic men for their extraordinary actions to save someone else’s life,” said Maui Fire Chief Jeff Murray, who joined the commission in presenting the awards.

“Without regard for their own safety, these men put their own lives in harm’s way, to save the life of another. Their actions exemplify great heroism, and we are proud to be able to recognize them for their courage and selflessness,” said Chief Murray.

The Kahuola Award is given to individuals within the County of Maui who have demonstrated heroic acts to save a life.

The lastest recipients were presented with their awards during the Fire and Public Safety Commission’s monthly meeting on March 12, 2015.

Since its establishment in 2004, there have only been 16 Kahuola Award recipients.  Each award is hand-crafted by local ukulele crafter Leroy Hokoana. 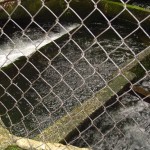 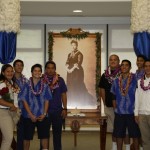