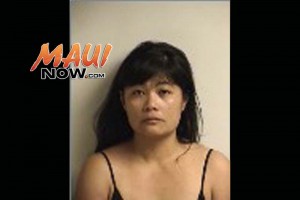 A Wailuku woman was arrested as a suspect for allegedly operating a vehicle involved in a fatal hit-and-run pedestrian accident on Dairy Road in Kahului on Friday night.

Police say the suspect, identified as Dolly Ai, 44, was allegedly operating the truck at the time of the collision.

On Tuesday, Jan. 19, 2016 at approximately 5:16 p.m., thanks to an anonymous tip received, police say the truck was located at a residence in Wailuku by officers from the Wailuku Patrol Division.

Ai was arrested for Accidents Involving Death or Serious Bodily Injury and was booked and released pending further investigation.

The pedestrian, identified as Adam Shane Riley originally from Oceanside, California, was not in a crosswalk at the time of the collision and was transported to the Maui Memorial Medical Center in critical, life-threatening, condition where he later succumbed to his injuries.