A nearby resident reported hearing a loud boom and came outside to see what happened. The resident found the discs in the road and reported smelling a chlorine type odor. He did not see anyone stop to claim the product on the roadway.

Firefighters arrived to find a 150 foot section on both lanes of Hāna Highway covered with round hockey puck type discs. It was believed to be solid chlorine tablets typically used in swimming pools. They could not find the transport container, any other identifying carton, nor the person responsible for the accident.

Hāna Highway was closed at about 4 p.m. to allow the HazMat crew to vacuum the broken tablets and dust from the roadway. The highway was reopened at around 4:30 p.m. 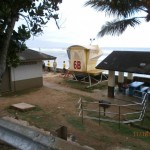 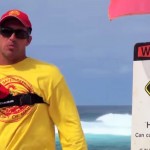