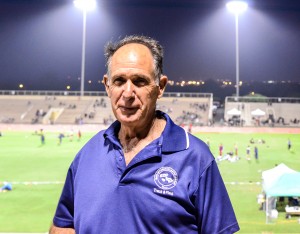 Allan Fernandez, president of the Maui Interscholastic League track and field association, has been officiating track meets since 1979. Photo by Rodney S. Yap.

Dedicated, impartial and by the book.

That’s how two of the Maui Interscholastic League’s most senior track and field coaches described Allan Fernandez, the sport’s top official with 36 years of experience and Hawaii’s authority on the rules and regulations governing prep track in the 50th state.

“He’s one of the senior officials in the state now,” said Baldwin boys assistant coach Neil Takeyama. “Allan has always been a stickler for the rules. On Oahu they let a lot of stuff go, but here on Maui it’s by the rule book.”

Takeyama’s 42 years of coaching track at Baldwin can only be surpassed by Gary Sanches’ 47 years, which includes multiple MIL championships at three MIL schools — St. Anthony, Maui High and Baldwin.

“Many of the old-timers on Oahu have retired so Allan leads the next generation of officials who have stepped up to the plate. He’s knowledgeable, he’s fair, and even though we know him, he’s disqualified us many times.

“But Allan’s a good guy,” said Sanches, who started on Molokai and is currently an assistant at Baldwin. “He’s loyal and he’s just like Satoki (Yamamoto), he has all the equipment, even down to the plates and chopsticks for the host school. He’s “Mr. On the Ball”, and besides setting up flags and officiating he does everything else. And if you ever needed a hammer or something, I’m sure Allan has one. That’s just how he is, and believe me it’s hard to find people like him these days.” 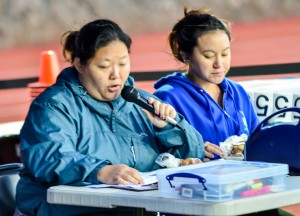 Allan Fernandez started off his 36-year career as a track official handling the clerk of course duties. Kimi Kusumoto is the head clerk of course today and her assistant is Amber Nolan (right). Photo by Rodney S. Yap.

The president of the MIL track and field association will also serve as head referee again today, when the finals of the Victorino Ohana Invitational begins at 4 p.m. The running events start at 5 p.m. with the girls 100-meter hurdles at the Yamamoto Track & Field Facility.

Fernandez, a 1967 St. Anthony graduate, who dabbled in the 100 and long jump at the Old Kahului Fairgrounds, has seen almost everything there is to see in the sport here and on the Neighbor Islands. Gone are the days of the asphalt surface at War Memorial Stadium or the hand-held stopwatch. Today athletes are allowed to wear jewelry and wristwatches.

When it comes to MIL track and field, Fernandez is the long-time resident expert who did not plan to make a name for himself doing volunteer work every spring. But his dedication and willingness to organize the participating schools and their respective volunteers, have led others, like MIL Executive Secretary Joe Balangitao Jr., to acknowledge Fernandez’ special skill set.

“He’s invaluable and gives of his time selflessly,” Balangitao noted. “He’s also very knowledgeable in track and keeps up with the rules and is very professional. He has a very even-tempered disposition that makes him the right person for the job.

“If he ever retires I don’t know who could take his place because he’s by the book, but he’s also fair, and that is what I like about him.” 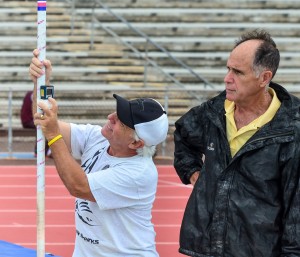 As head referee, Allan Fernandez signs off on all new records. Here he watches as pole vault official Gene Zarro measures the distance to the upright. Photo by Rodney S. Yap.

Now more than ever, Fernandez is recognized in public by former MIL track athletes.

“That’s a cool thing, when the kids recognize me 10 to 15 years later and say, “Oh, Mr. Official how are you doing, are you still doing track?”

Many are married now, but they see Fernandez in the infield checking on events, verifying new records, or explaining a disqualification to a head coach. Sometimes these former athletes, now parents, stand along the fence line to say “hi” to Fernandez.

“That kind of heart-warming gesture gives me a great feeling . . . knowing they still remember me.”

Fernandez said he doesn’t remember being so busy when he first started as the league’s clerk of course, almost four decades ago.

“I started in 1979 when Jamie Yap was the athletic director at St. Anthony. I was good friends with the family and he asked me to come and help him, because St. Anthony was in charge of track. I started out as the clerk of course and have been here ever since.”

Fernandez said he has missed only one state meet in 36 years and was absent from only two MIL meets over that time span. 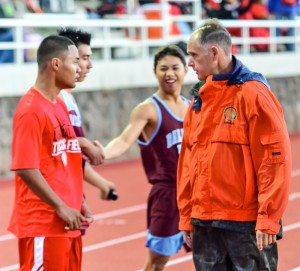 Then in the mid-90s, when Satoki Yamamoto was still alive and setting up the infield flags, Fernandez slowly transitioned from assistant to replace him as president and head referee.

“Satoki was such a kind person, he wouldn’t DQ anybody. He would give everybody a break, to the point where nobody got DQ’d and they could do anything they wanted. That’s when I told him we have to start enforcing the rules. He had good intentions, but he was too kind hearted.”

Feeling his way around the rule book was no problem for Fernandez, who had a similar role as union stewart at the Makawao post office, where he worked for 38 years as a mail carrier and often disputed contracts with his boss.

Married to the former MaryAnn Spenser for 35 years, Fernandez has served as head referee at the state championships the last eight years.

“This year I am going to be the head referee for the running events at state,” he said.

Fernandez earned his stripes early, recalling a decision he helped make in the early 80s that disqualified the state’s No. 1 discus thrower from Punahou School.

“The state meet was at Kaiser, and the kid was the best in the state. Right after his first throw he went back to his coach and they were viewing video. And I told the Oahu officials that the Punahou thrower and his coach had committed a violation of the rules. And they said, “Oh that’s all right, let them go, we will warn them.” 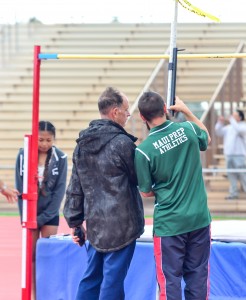 Determined, Fernandez continued to state his case and showed Oahu officials the rule in writing.

“The rule book doesn’t say the athlete should get a warning. It states that if you view a video in between your competition you’re disqualified. I argued the ruling and they finally said “OK” we are going to disqualify him.

“That’s one I remember. I don’t care if he’s the best athlete or the worse athlete, the rule is the rule and it’s not fair for the other athletes.”

Another fond memory Fernandez shared was the impression Shane Victorino made on him in 1999, when the four-sport all-star decided to run track and play baseball on the same days.

Although Victorino was dedicated to baseball, he still wanted to run track. Coaches from both sports agreed to share Victorino’s talents, and the close proximity of the two venues made the historic feat possible. 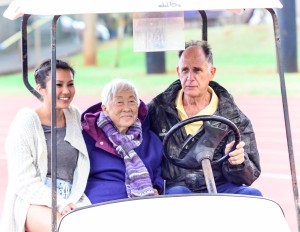 Victorino, 35, is currently with the Chicago Cubs. He is a veteran and journeyman, having played in the majors for several teams in a career that started in 2003. He had stints with the San Diego Padres, Philadelphia Phillies, Los Angeles Dodgers, Boston Red Sox, and the Los Angeles Angels.

Before graduation and signing a professional baseball contract, Victorino would make a name for himself in track and field, wowing a huge War Memorial Stadium crowd en route to sweeping the sprints — 100, 200, 400 — in 1999. His time of 10.80 seconds remains the non-wind-aided state meet record today — 17 years later. Victorino was also clocked in 21.54 and 49.27, respectively. His times in the 100 and 200 remain No. 1 all-time in the MIL.

“Officials statewide respect him, although not as much as I think they should,” concluded Balangitao about Fernandez. “But every state tournament meet that I’ve ever been involved with has been smooth, whether I was working as an AD or since I’ve done this job — and it is all because of people like Allan.” 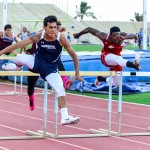 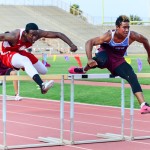