Firefighters got the call at 4:39 p.m. for a female hiker on the King’s Trail that was feeling ill and could not walk out on her own.

A ladder crew from Wailea and a Kahului rescue crew onboard Air 1 responded to La Perouse Bay to search for the woman.

At 5:18 p.m., Air 1 located the woman on the trail in a lava field about a mile from the trailhead, and was airlifted back to the parking lot at La Perouse Bay where she was checked out by paramedics.

She was taken to the Maui Memorial Medical Center for further treatment.

The Kīhei woman was considered an avid and very experienced hiker, and had more than enough food and water to make the roughly four mile round trip hike to the Kanaio area, fire officials said.

She called her friend for help when she suddenly became extremely ill on her way back and was unable to walk any further. The friend then alerted emergency dispatchers. 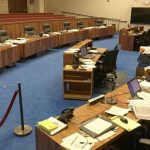