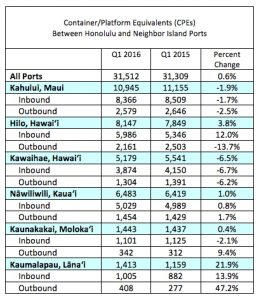 Young Brothers Limited’s intrastate cargo shipments between Honolulu and six Neighbor Island ports were essentially flat, increasing slightly (.6 percent), for the first quarter of 2016 compared to the same period in 2015.

The agricultural sector volumes were down on all islands due to dry weather.

“The first quarter ended with only a modest increase in overall shipments,” said Roy Catalani, vice president of Young Brothers. “So far we aren’t seeing any strong trends emerge and it’s possible that, consistent with our cargo volume projections for the year, this lukewarm first quarter will foreshadow the rest of this year.”

The first-quarter results are on par with the company’s projection for a .4 percent volume increase in
intrastate cargo volumes for all of 2016. The projection was completed by Economist Paul Brewbaker of TZ Economics.

“Recent economic conditions in Hawai‘i’s Neighbor Islands have not been as good as on O‘ahu,” Dr. Brewbaker concluded. “In contrast to the early-2000’s economic expansion when Neighbor Islands
homebuilding was a dominant engine of Hawai‘i economic growth, the Neighbor Islands in the 20 teens are experiencing, and seem likely to continue to experience, relatively muted growth of aggregate output, income and jobs compared to O‘ahu or to national economic experience.”

Certain sectors and projects positively affected cargo volumes. Major construction companies shipped large volumes of supplies and equipment from Lāna‘i with the completion of resort renovation projects in the first quarter of the year.

Other sectors were mostly flat, with some exceptions. For example, the recycling industry continued to ship less than a year ago, though it is up from the last quarter of 2015.

Agricultural Cargo Volume Down in First Quarter of the Year 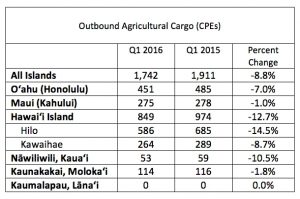 The agricultural sector continued to be challenged by dry weather, making statewide shipments weak for the beginning of 2016.

In the first quarter, intrastate shipments of locally-grown agricultural products decreased by 8.8% compared to the same period last year, with declines at all ports with agricultural exports.

Yields of papaya, a dominant crop in the southern part of Hawai‘i Island, have yet to recover from damage during last year’s heavy rains, and large quantities are not expected until later this year. 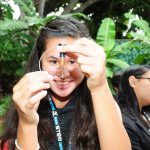 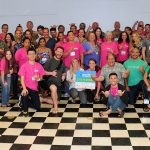