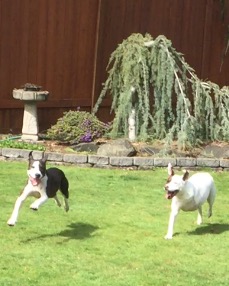 The long and winding road leads to… Tacoma?  Remember Fitz–the emaciated young dog found in the middle of the road to Hāna earlier this year?

He is now reportedly thriving and leading an active life in Tacoma, Washington.

The two-year-old dog was found by a Good Samaritan in February, 2016, and was taken to the Maui Humane Society for help to treat a fractured jaw, tapeworm, hookworm and fleas.

“He was wearing a tattered collar, but the poor guy had clearly been on his own for some time. Fitz was severely emaciated, tired and hungry. His ears were covered in fly strikes and he was infested with hookworm, tapeworm and fleas. Most noticeably, his jaw appeared broken, and he was missing a few canines—likely from being struck by a car. We’re so glad he was brought to MHS, because he definitely needed our help,” said Nancy Willis with the Maui Humane Society.

“X-rays confirmed that Fitz’s jaw was badly fractured – so our priority was to rehabilitate Fitz so he would be healthy enough to undergo surgery to fix it. Remarkably, his injury did not prevent him from eating- so Fitz was given three square meals a day and napped the days away in MHS staff member Ruby’s office as he gained his weight and strength back,” said Willis.

During this time, Fitz also received regular baths and treatment for his various parasite infestations and infections. Within two weeks, MHS representatives say Fitz had gained 10 pounds and his “splotchy coat was on its way to a beautiful silky smooth black and white.”

“Even before his surgery, he was already nearly unrecognizable and well on his way to a full recovery,” said Willis.

On March 5th after about three weeks of rehabilitation at the shelter, Fitz was finally strong enough to undergo surgery. Though he lost several teeth and a portion of his right jaw, Willis said, “you could tell right away that the surgery brought him tremendous relief and his bright personality really started to shine through.”

All of Fitz’s medical expenses were covered by donations to Maui Humane Society’s Hope Fund, which enables the agency to go above and beyond normal means to save sick and injured homeless pets in need.

“When MHS supporter Cheryl read about Fitz’s story in our weekly e-newsletter, she knew she had to meet this sweet survivor,” said Willis.

Almost exactly three years ago, Cheryl adopted her dog Tiki from the Maui Humane Society. At the time she was known as Bethany – another survivor who was left at the shelter overnight with an injury that hadn’t received proper medical attention, leading to nerve damage and atrophy in her front left leg. The Hope Fund made her amputation and rehabilitation possible and her story was featured in the MHS Summer 2013 issue of Cause4Paws.

After meeting Fitz and spending some time with him, Cheryl agreed to foster him for the remainder of his recovery. He went to Lahaina with her on March 13, creating space at the shelter for other pets in need.

Two weeks later, Cheryl adopted Fitz and brought him with her to Tacoma, WA where Cheryl lives part-time with her dogs, including Tiki. “We knew Fitz would live a full, happy life with Cheryl– his last exam report after two weeks in Cheryl’s care reads: Fitz looks amazing. His coat is beautiful and he is a happy, active boy.” 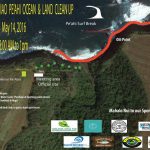