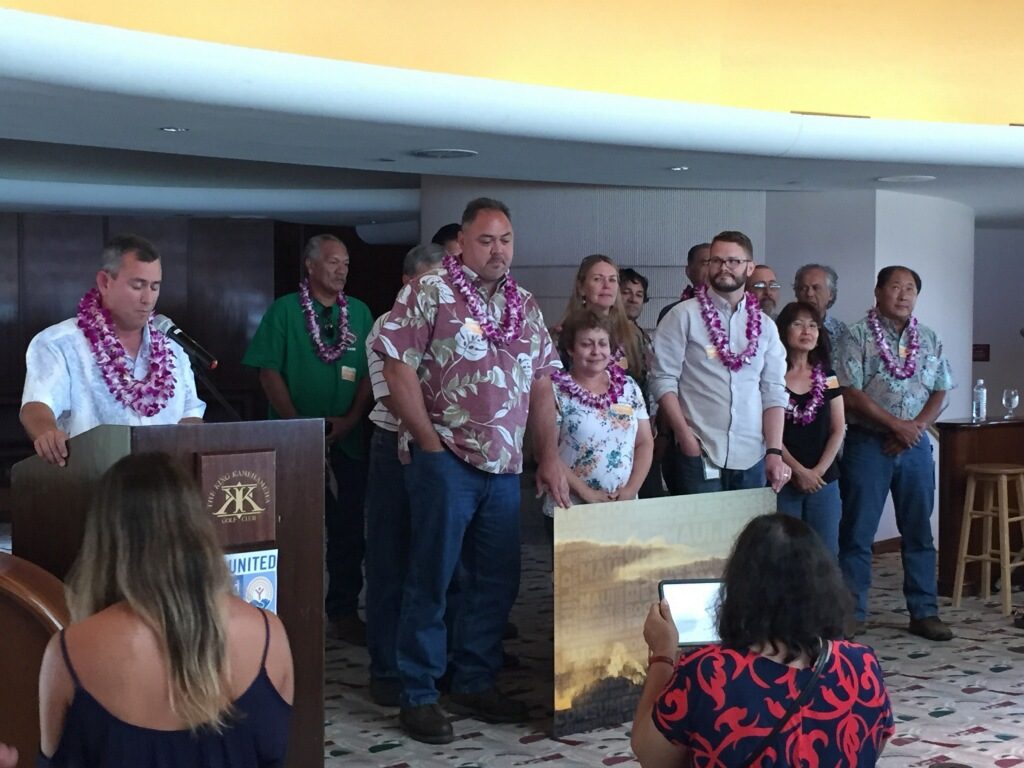 Workers at Hawaiian Commercial and Sugar Company on Maui were honored with a Legacy of Giving award issued by Maui United Way at the organization’s 47th Annual meeting and recognition luncheon held today at the Waikapū Ballroom of the King Kamehameha Golf Course.

For nearly 75 years, and most recently, employees of Hawaiian Commercial & Sugar Company have donated up to $60,000 a year collectively through their fare share program, encouraging employees to contribute one hour of their pay per month to Maui United Way. 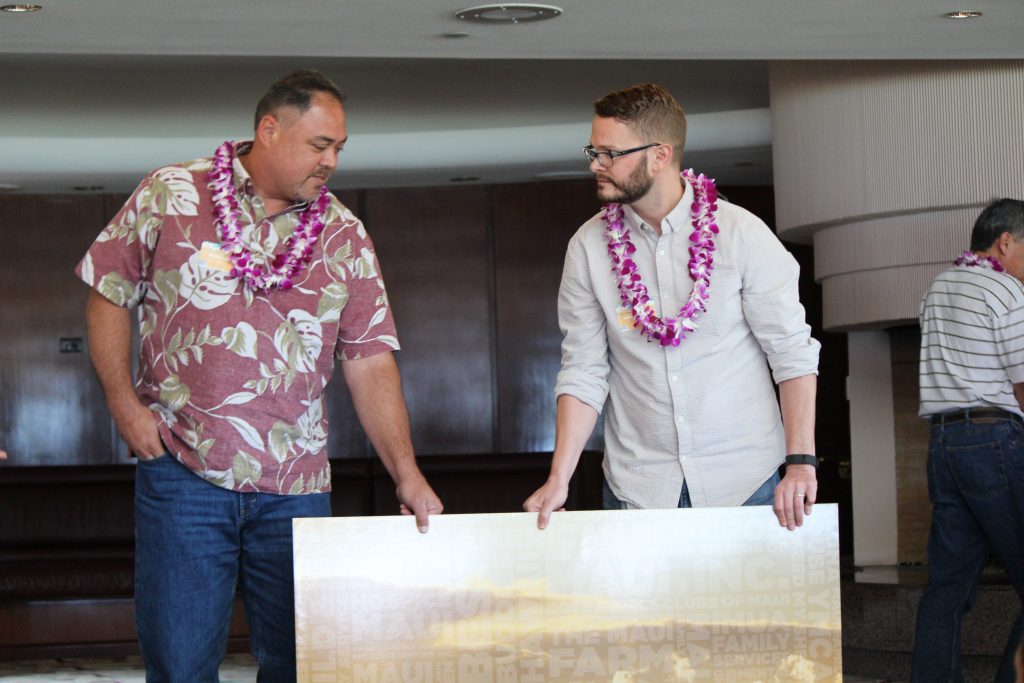 HC&S employees join in offering a corporate gift of $100,000 on behalf of parent company Alexander & Baldwin, Inc. to Maui United Way to kick off the organization’s 2015-16 campaign. HC&S employees were honored with MUW’s Legacy of Giving award. Photo: (6.9.16) by Wendy Osher.

“This impact generated by HC&S’s employees will remain unique to Maui’s history and will forever be embodied in the millions of lives that were touched since their first employee contributions to MUW in the early 1940s,” said Saedene Ota who serves on the A HUI HOU Fund Committee, which was created by Maui United Way and those who wanted to help the employees of HC&S as the company transitions away from sugar operations.

“Since the very beginning, they have continued to give so much to Maui’s non-profit community and will forever be unduplicated as a pioneer of employee giving in Maui County,” said Ota. 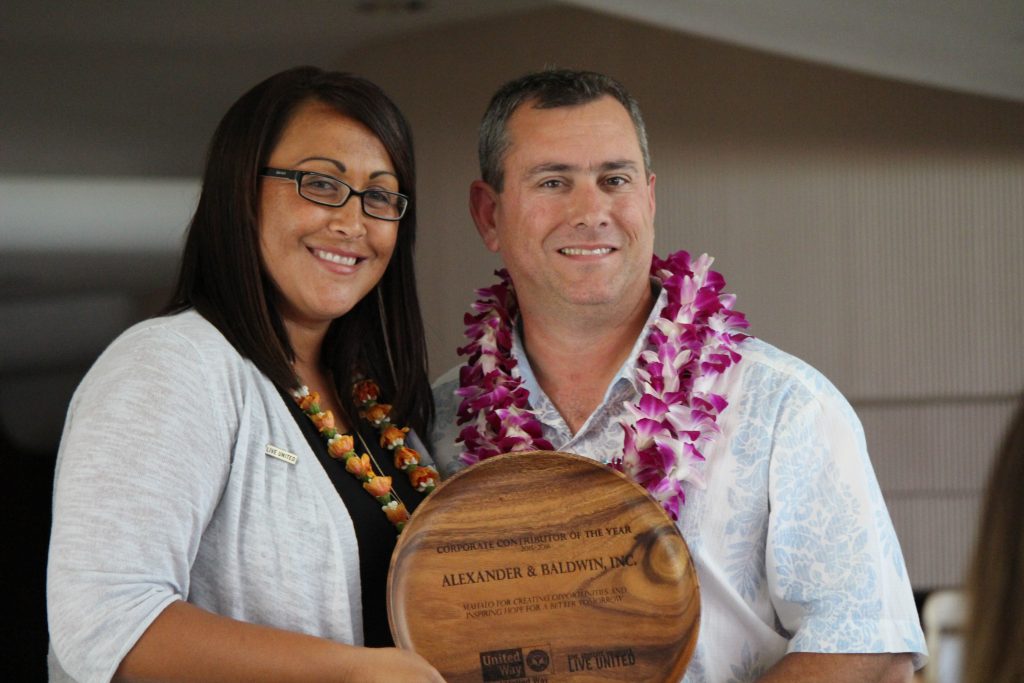 “This generosity, character of selflessness, is so indicative of plantation life.  A handful of different ethnicities learned to work together and grew a local culture of helping strangers, respectively agreeing to disagree, and giving without question because they understood that they were fortunate and others were not,” said Ota.

With growing concern regarding the over 600 employees that will be laid off due to the sugar plantation closure through the end of the year, Maui United Way stepped up to launch the fundraising campaign earlier this year, said Maui United Way president Laksmi Abraham. 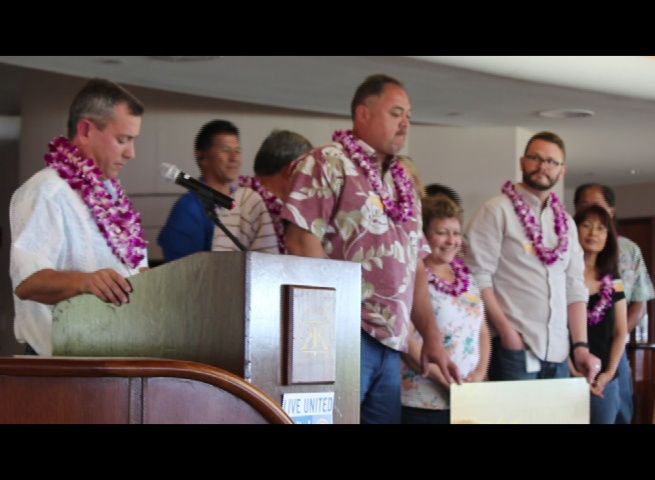 HC&S employees join in offering a corporate gift of $100,000 on behalf of parent company Alexander & Baldwin, Inc. to Maui United Way to kick off the organization’s 2015-16 campaign. HC&S employees were honored with MUW’s Legacy of Giving award. Photo: (6.9.16) by Wendy Osher.

“The A Hui Hou Fund represents our appreciation for their continued support to Maui’s community and an opportunity to return our support in their time of need,” said Abraham.

Rick Volner, HC&S General Manager accepted the award on behalf of the company’s employees and invited those in attendance to the stage to join in the recognition.

“On behalf of the A&B Foundation and the A&B family of companies here on Maui, and our employees, I wanted to thank everyone for this opportunity and honor.  We’ve had the privilege of being a part of the Hawaiʻi community for more than 140 years.  We’ve had very important core values instilled in us from our very beginning. Those values include supporting our community.  It’s very important that Maui United Way provides us the vehicle and opportunity to do that,” said Volner.

“Almost 20 years ago as a young college kid, fresh out of college, I had an opportunity to get work at HC&S and I had the privilege to be recruited to be our company’s campaign coordinator.  I use the term ‘recruited’ very loosely,” he said.

Volner went on to explain how he got involved with Maui United way saying, “The classic plantation mentality is: ‘(Boss) Hey boy. You know what Maui United Way is? (RV) Sure. (Boss) Good. Cause you’re in charge.’ To be honest, I didn’t know what Maui United Way was.  It probably was one of the best experiences of my life.  It really taught me a number of things about the Maui community, but probably more importantly taught me about the generosity of our employees at HC&S.”

Volner and more than a dozen HC&S employees were met with a standing ovation by those in attendance.

In addition to the Legacy of Giving award, HC&S’s parent company, Alexander and Baldwin, Inc. was honored with the Maui United Way’s Corporate Contributor of the Year award for 2016.

In issuing the award Abraham said, “The company has been supporting Maui United Way since 1969, and has given almost $4 million since then.  Each year, this company and their employees show their extreme generosity and concern for our community with an average ongoing employee campaign of $58,000.

“They are a true pacesetter in our community, leading with an outstanding employee campaign and an unparalleled corporate gift,” said Abraham who noted that over the last 10 years, A&B has contributed well over a million dollars.  This year their contribution to MUW represents 15% off all giving to the campaign.

Earlier today, A&B stepped up once again and awarded Maui United Way with $100,000 to launch the organization’s 2016-17 campaign and committed their support going into the next year. 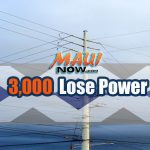 Vehicle Accident Knocks Out Power to 3,000 on Maui 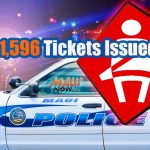