Maui County Unemployment Levels Off at 3.2% 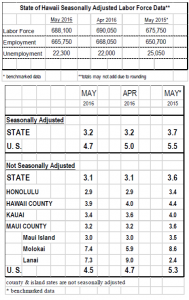 Maui County’s not-seasonally-adjusted unemployment rate for May 2016 was 3.2%, the same figure as last month, and down from 3.6% from the same month last year, the Hawai‘i State Department of Labor & Industrial Relations (DLIR) announced last week.

The Island of Maui again had the lowest unemployment rate in the county at 3%, the same as last month, and down from 3.5% from May 2015.

Lana‘i did not experience the highest unemployment rate in May, as it did in April. Unemployment declined from 9% in April to 7.3% in May. The rate was still significantly higher that last year’s May rate of 2.4%.

Moloka‘i had the highest unemployment rate in the county at 7.4%, down from the previous month’s 5.9 and down from last May’s 8.6%

The seasonally adjusted unemployment rate for the state for May was 3.2%, the same as in April.

The not-seasonally-adjusted rate for the state was 3.1% in May, the same as in April.

Nationally, the seasonally adjusted unemployment rate was 4.7 percent in May, down from 5 % in April.

The unemployment rate figures for the state and the US in this release are seasonally adjusted, in accordance with the US Bureau of Labor Statistics methodology.

The seasonal fluctuations in the number of employed and unemployed persons reflect hiring and layoff patterns that accompany regular events such as the winter holiday season and the summer vacation season.

This technique uses the history of the labor force data and the job count data to identify the seasonal movements and to calculate the size and direction of these movements. A seasonal adjustment factor is then developed and applied to the estimates to eliminate the effects of regular seasonal fluctuations on the data. Seasonally adjusted statistical series enable more meaningful data comparisons between months or with an annual average.

The full report can be downloaded here. 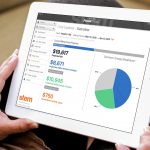 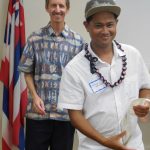