805, if you weren’t aware, is the area code along the Central California coast, and the name of a new beer, recently released by Firestone Walker Brewing Company, based in Paso Robles. Called an “uncomplicated” blonde ale, 805 has caught on quick…maybe even as fast as the dirt bikes that are an entrenched part of the culture on the Central coast.

Heen says it’s a vibe that resonates with many of our own local communities here in Hawai‘i, which is partly why Young’s Market is bringing Firestone Walkers brews to our state for the first time.

“We’re not going to have 20 breweries under our distribution; we’re going to have a few select breweries who are doing the right things for the right reasons,” says Heen, who values companies that are authentic, passionate and relatable. “Understand our true lifestyle of being in Hawai‘i, not necessarily what the image is of us looking from outside in.”

Heen speaks from experience.  Young’s Market introduced Colorado’s New Belgium Brewing, with its notable Fat Tire Ale, to Hawai‘i one year ago.  Since providing the supply, Heen says demand has been off the scales.

“We started off and we didn’t really know where it was going to go, and then we sold three times as much as we thought we would in the first two weeks,” he says. “Same thing in the first two months, and it’s now become the #1 craft beer in Hawai‘i outside of the local beers.” 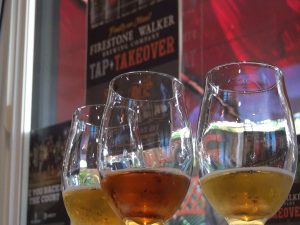 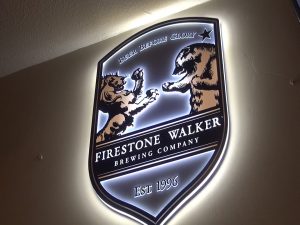 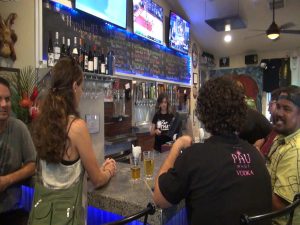 Among the crowds at the Firestone Walker tap takeover is Chef Sheldon Simeon of Tin Roof. Photo by Kiaora Bohlool. 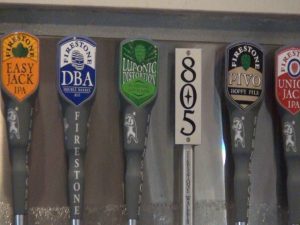 Firestone Walker beers on draft at What Ales You in Kīhei. Photo by Kiaora Bohlool. 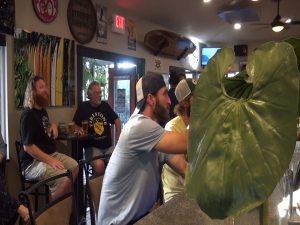 Beer fans unite at What Ales You, including two who wore their own Firestone Walker shirts. Photo by Kiaora Bohlool. 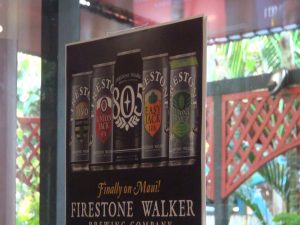 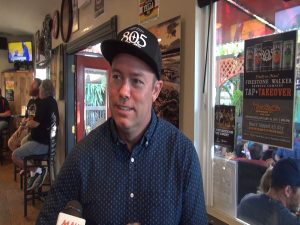 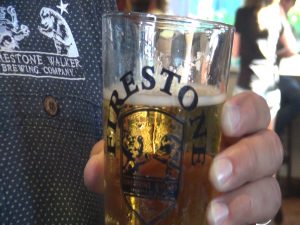 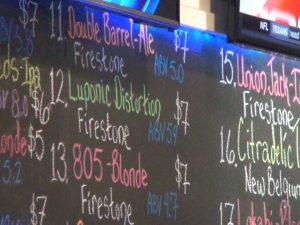 Beer board at What Ales You in Kīhei. Photo by Kiaora Bohlool. 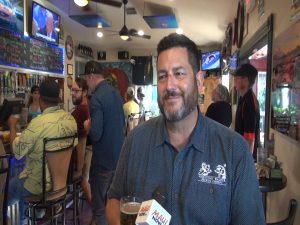 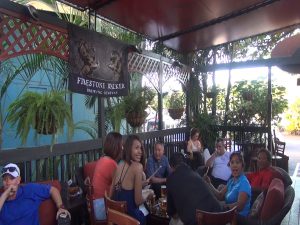 Groups cheers to the tap takeover in Kīhei. Photo by Kiaora Bohlool. 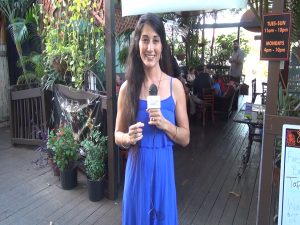 Kiaora Bohlool at What Ales You in Kīhei.

Young’s Market hopes to fire up the craft fans with these new California brews too.  There are already promising signs; at the What Ales You event, two customers showed up in their own Firestone Walker t-shirts, because they were just that excited about the local launch.
“That’s the kind of enthusiasm that just exists in the market with beer people,” explains Heen. “We’re trying to grow on that, and as we do, we’ll educate people the same way we have done with wine and spirits and sake.”
Being in the earliest stages of a Maui release, Firestone Walker beers can be found on tap at just a few select spots, including What Ales You in Kīhei, The Dirty Monkey Bar in Lāhainā and Monkeypod in Wailea. But cans (and some bottles) will be on the way in March, which means you’ll likely be seeing a lot more of the formidable Lion and Bear logo, and not only at bars and restaurants.
“A lot of the big chain partners on the mainland, like Safeway, Long’s CVS, Costco, they all have expressed a desire for us to come here as well, so the timing seemed to line up really nicely,” remarks David Macon, the Vice-President of Sales & Marketing at Firestone Walker Brewing Company.
The business was founded by two brothers-in-law, David Walker and Adam Firestone, more than 20 years ago. Macon explains how the history involves a longtime winery and…reality TV!
“David’s of English descent, he’s really into beer, and the Firestones had been running a third-generation family winery which many people know about; they sold that shortly after the younger brother was on The Bachelor,” Macon says.
He adds the brews, which are typically English-style, are known for their quality and balance. Hawai’i is the only state on the company’s expansion list this year, and getting it here means careful logistics for refrigeration, freight forwarding, and inter-island transport. But Macon says expanding not just supply, but awareness, means a lot.
“There’s a lot of great beer being made in America,” he explains. “We’re starting to change peoples’ minds, that it’s not just funky, clunky weird beer, but it’s a lot of really great beer people can try locally, regionally and even nationally; a great alternative to the large industrial beers.”
Kiaora Bohlool
Kiaora Bohlool has been a journalist since 1998. With chefs in her family, she has a lifelong appreciation for food... 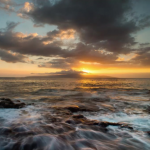