A 62-year-old male visitor from Salem, Oregon died after he was found floating face down in the ocean in Kā‘anapali while snorkeling with a friend on Friday afternoon.

Fire officials say the man had been snorkeling near shore for less than 5 minutes when a friend who was standing in the water nearby, found the victim floating and unresponsive. The victim was using a traditional two piece mask and snorkel.

Emergency crews responded to the report of the man being pulled from waters fronting the Marriott Maui Ocean Club at 12:56 p.m. on Friday Jan. 26, 2018.

Firefighters arrived at 1:01 p.m. and found bystanders on the beach performing CPR on the man. Firefighters continued CPR until paramedics arrived a short time later.

Despite all life-saving efforts, the man could not be revived and was pronounced dead at the scene.

Beachgoers pulled the man to shore and started CPR.

Firefighters from Lahaina and a Kīhei paramedic crew responded to the incident.

There were two scuba deaths on Maui on Friday, Jan. 26, 2018.  A 52-year-old man from Saint Paul, Minnesota died after being pulled unresponsive from waters off of Olowalu while on a snorkel cruise on Friday morning. The other involved 62-year-old male visitor from Salem, Oregon who died after he was found floating face down in the ocean in Kā‘anapali while snorkeling with a friend on Friday afternoon.

On Saturday, Jan. 27, 2018, a 71-year-old man from Berkeley, California was revived and transported to the hospital in critical condition after he was found floating face down while snorkeling in South Maui waters on Saturday.  *Update: The man has since died and marks the ninth death in two weeks on Maui since Jan. 14, 2018. 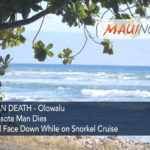 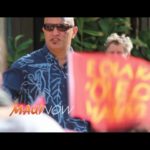