Four men from Wyoming were rescued in waters off of west Maui on Sunday morning after becoming caught in gusty winds offshore at Nāpili Bay.

Lifeguards and firefighters in West Maui responded to Nāpili Bay for an initial call of two standup paddle boarders having trouble getting back to shore at around 11:13 a.m. on Sunday, April 15, 2018.

Lifeguards on a rescue watercraft spotted the two paddle boarders, along with two snorkelers about 150 yards offshore, and brought four men safely back to the beach.

According to department reports, two men visiting from Wyoming, one in his 60s and the other in his 30s, had gone standup paddle boarding fronting Nāpili Bay and got caught by stiff 25+ mph winds blowing them offshore.

Fire officials say two other men in their 30s went out with snorkel gear and fins to assist the men but they too, were not able to make headway against the gusty tradewinds.  The snorkelers also were from Wyoming and had come to the beach along with the two paddle boarders. 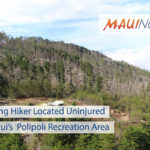 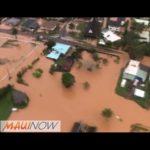