Maui police arrested a Maui man and charged him with two counts of first degree attempted assault after a motor vehicle collision and hit-and-run incident in Kahakuloa on Sunday morning.

Police say 24-year-old Kaleo Kubo of Waiheʻe was later apprehended in the area of Nākālele Point and was being held in lieu of $500,000 bail at last report.

The investigation stemmed from an accident reported at 9:33 a.m. on Sunday, Aug. 19, 2018, in Kahakuloa Village in which police say they were informed that one of the vehicles involved, a white Honda four door sedan, fled the scene of the collision toward Lahaina.

Police say the initial investigation found that the sedan, which was reported stolen, was operated by a male who allegedly struck two individuals with the vehicle while he fled the scene of the crash. 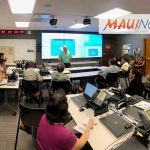