The 308-foot Chinese-flagged commercial fishing vessel Ou Ya Leng No. 6 ran aground on Taka Atoll in the Marshall Islands, on Wednesday, Jan. 1, 2019.

The report was received by watchstanders in Honolulu at 4:15 a.m. from Maritime Rescue Coordination Center China personnel who reported that the fishing vessel was taking on water 180 nautical miles northeast of Kwajalein Atoll in the Marshall Islands.

It is unknown at this time the cause of the incident, the nationality of the crew and disposition of any cargo or fuel.

“Our first concern is for the crew the vessel, and we are working with our partners to effect a rescue,” said Brendon Ritz of JRCC Honolulu. “We are also working with the government of the Marshall Islands to respond to the grounded vessel.”

The Hercules crew is coming from Wake Island where they were involved in the Sincerity Ace case since Monday. Their home base is Coast Guard Air Station Barbers Point in Hawaiʻi.

The Ou Ya Leng No. 6 is reportedly a fish carrier targeting squid in the Western and Central Pacific Fishing Commission area now aground in the territorial waters of the Republic of the Marshall Islands.

Taka Atoll, also known as Toke Atoll, is a small, uninhabited coral atoll in the Ratak Chain of the Marshall Islands and is roughly triangular made up of six small islands with an area of less than a square mile and lagoon in the center. Around 400 people inhabit nearby Utirik Atoll. The Republic of the Marshall Islands is located near the equator and slightly west of the International Date Line. Its total population of about 53,000 people live across the nation’s 29 coral atolls with Majuro as the capital.

The Andrea Victory is participating in the Automated Mutual-Assistance Vessel Rescue System, a worldwide voluntary reporting system sponsored by the United States Coast Guard. It is a computer-based global ship reporting system used worldwide by search and rescue authorities to arrange for assistance to persons in distress at sea.

“This case is unfolding in a remote part of the Pacific with most surface vessels days away; thus the assistance of commercial vessels is extremely valuable to our effort coordinating help for this crew,” said Ritz. 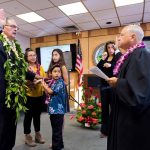 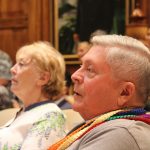