There were no arrests today (July 15, 2019) at Maunkea Access Road where at least seven demonstrators were chained to a cattle guard in an effort to prevent planned construction of the Thirty Meter Telescope.

State officials released information this afternoon saying, “Out of concern for the health and safety of those protesters, law enforcement officials decided to give them the option of unlocking themselves and leaving without being arrested.”

Maui Now has learned that a gate has since been installed at the site.

State officials say, “For public safety, the State Department of Transportation set up concrete barriers today along the Daniel K. Inouye Highway (formerly known as Saddle Road) near the Mauna Kea Access Road intersection and installed a gate today on the access road.”

In an update issued by the state Maunakea Media Team, the public is being urged to stay away from the area.

“It is a remote area and access to medical care limited. If you are in the area, which is at about 6,000 feet altitude, remember to monitor your physical health, stay hydrated and protect yourself from sun exposure. The area is also prone to sudden changes in weather including temperature, rain and visibility.”

At least seven people have chained themselves to a cattle guard along Maunakea Access Road on Hawaiʻi Island in an attempt to block vehicular access to the construction site of the Thirty Meter Telescope.

Maui resident Noe Ahia is among those at the location.  She is a member of the Mauna Medic Healers Hui, a group tasked with caring for those who are protesting the construction of the Thirty Meter Telescope atop Maunakea.

According to Ahia, the group of demonstrators “locked down” at around 3 a.m. at the cattle guard site. Shortly after 9 a.m., officers with the state Department of Land and Natural Resources Division of Conservation and Resources Enforcement had just arrived at the location. At 10:30 a.m., we received information that demonstrators remained “locked down” at the site.

Others at the site include Kaleikoa Kaʻeo (also from Maui), Walter Ritte from Molokaʻi, Jamaica Osorio and Noelani Goodyear Kaopua, according to Ahia.

In a brief video from the site at around 9:10 a.m., Kaʻeo provided us with the following comment:

“We’re here at Maunakea Access Road resisting the attempt to construct the TMT telescope upon our mountain–our sacred mountain of Maunakea.  First I just want to say, this is Hawaiian land of course and that as the kanaka of this land, we try our hardest, our best in fact to maintain our dignity in our struggle to reclaim our right to our self determination of what we want to do for the future of our people and we can no longer tolerate the Ige administration and the state of Hawaiʻi, including the Hawaiian Homelands in their–not just mistreatment of but really mismanagement of the affairs for our people.  So at this point, we will do whatever it takes.”

Opponents of the project have maintained that further development atop the summit would desecrate an area considered sacred.  Advocates call the project a next-generation telescope and say the mountain is a special place that can uniquely serve as a window into the universe.

The cattle guard site is one of several locations along Maunakea Access Road where demonstrators are stationed.  We are told that a separate site located further downhill includes kupuna or elders who are also standing ground in protest against the project.

“We have followed a 10-year process to get this point, and the day for construction to begin has arrived. At this time our number one priority is everyone’s safety. As construction begins, I continue to be committed to engaging with people holding all perspectives on this issue and to making meaningful changes that further contribute to the co-existence of culture and science on Mauna Kea.”

A teleconference briefing was held at 11 a.m. featuring Jason Redulla, Chief of the Division of Conservation and Resources Enforcement Unit (DOCARE) with the Department of Land and Natural Resources.

Redulla said the focus right now is on safety and establishing cement barriers along the Daniel K Inouye Highway to protect people from traffic.  Redulla said:

“This morning law enforcement began an operation to close the Maunakea Access Road.  The operation began with a dialogue with protest leaders so that law enforcement can do its job of making the access road safe for everyone.  That dialogue continues and remains in progress.  The safety of the public present in the area of the Maunakea Access Road and the Daniel K Inouye Highway is our priority at this time.  To that end, the Department of Transportation, working with law enforcement will begin installing barriers on the shoulders of the highway to create a safety buffer between people and vehicle traffic.  We would also like to inform the public that Puu Huluhulu and its adjacent parking lot remains open and accessible to the public.  At this point in time, we will not be installing barricades along the Maunakea Access Road.  Lastly, it is very important for everyone who will be in the Maunakea Access Road and Daniel K Inouye Highway area to exercise extreme caution for the safety of everyone.  This intersection, with the amount of people that are present there, along with the shoulders and near the actual intersection, along with the vehicles traveling at highway speeds presents a very dangerous situation for everyone.”

TMT is slated for construction on UH-managed lands on Maunakea located in the conservation district regulated by the Board of Land and Natural Resources. 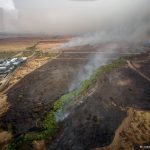 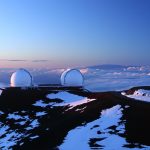