One year ago, activity on Kīlauea Volcano was remarkably different than it is today. Lava was flowing toward the sea, robust ocean entry plumes were fumigating coastal areas, and island air quality was impacted by huge amounts of volcanic gases and particles. Homes and farms were lost, along with agricultural land and beloved landmarks. Animal rescue efforts were ongoing, with pets and livestock evacuated by land and air. At Kīlauea’s summit, daily explosions and collapse events rocked nearby residents, and a large portion of Hawai‘i Volcanoes National Park was closed to the public.

Now, for the first time in over three decades, Kīlauea is not erupting. At the summit of the volcano, earthquake activity is low, and most of the National Park is open for business. No lava is flowing anywhere on Kīlauea, and volcanic air pollution on the island is the lowest it’s been since the early 1980s.

However, there are lingering issues in some areas near the 2018 eruptive fissures. Although lava is no longer erupting, residual heat and small amounts of gas continue to escape from ground cracks and vents as subsurface molten rock, perhaps only several hundred feet underground, continues to cool.

As small new cracks open in response to magma cooling, groundwater infiltrates areas of remaining heat, releasing steam (water vapor) and small amounts of other gases. Currently, areas adjacent to and uprift (west) of Highway 130 are particularly impacted by this residual heat and steam. These areas of elevated temperature may migrate, as cooling and groundwater movement continue.

In steaming areas near and uprift of the now inactive fissures, slightly elevated levels of hydrogen sulfide (H2S) and carbon dioxide (CO2) gases have been detected. While these gases may be released from cooling magma, they are also generated by decaying organic matter, or, in the case of CO2, from burning or smoldering vegetation.

Thus, some portion of the H2S and CO2 is likely generated from the increased temperatures affecting plants in the area. Vegetation heated in the absence of oxygen, a process known as pyrolysis, can form organic compounds, which may be responsible for the ‘chemical’ odor frequently detected in these steamy areas.

Importantly, current H2S concentrations are very low—at or below the minimum detection level of volcanic gas monitoring instruments, which is 0.5 parts per million (ppm). People can usually smell the rotten egg odor of H2S at much lower concentrations—ranging from 0.0005 to 0.3 ppm. Hydrogen sulfide is present in the lower East Rift Zone (LERZ) in tiny amounts, but that little bit can be quite noticeable.

Based on the odor threshold, the State of Hawaii has set a “nuisance level” for H2S at 0.025 ppm. However, negative symptoms of H2S exposure do not occur until concentrations are well above this level.

According to the Occupational Safety and Health Administration (OSHA), prolonged exposure to 2‒5 ppm H2S may cause headaches, eye irritation, nausea or breathing problems in some asthmatics. This is many times the concentrations currently measured near the LERZ thermal features.

Carbon dioxide concentrations in some LERZ steaming areas are elevated above the background atmospheric concentration of 412 ppm (2018 global average). While the air in a crowded meeting room can frequently exceed 1,000 ppm CO2, maximum concentrations measured in the LERZ are well below this level. OSHA has established an exposure limit for CO2 of 5,000 ppm averaged over an 8-hour work day.

Based on the history of previous eruptions, elevated temperatures and steam are likely to persist in the area for many years. The 1955 LERZ eruption produced thermal features that have been active for over 60 years, some of which are used as natural saunas. Even in the early 1990s, a temperature of 51 degrees Celsius (131 degrees Fahrenheit) was measured in a 1955 vent, but no volcanic sulfur gases (such as H2S) were detected (https://pubs.er.usgs.gov/publication/ofr94569).

The 1955 and 2018 LERZ eruptions share some similarities, but exactly where and how long heating and steaming will continue for any area is impossible to determine. Eventually, however, lingering surface activity related to the 2018 intrusion will begin its long, slow decline. 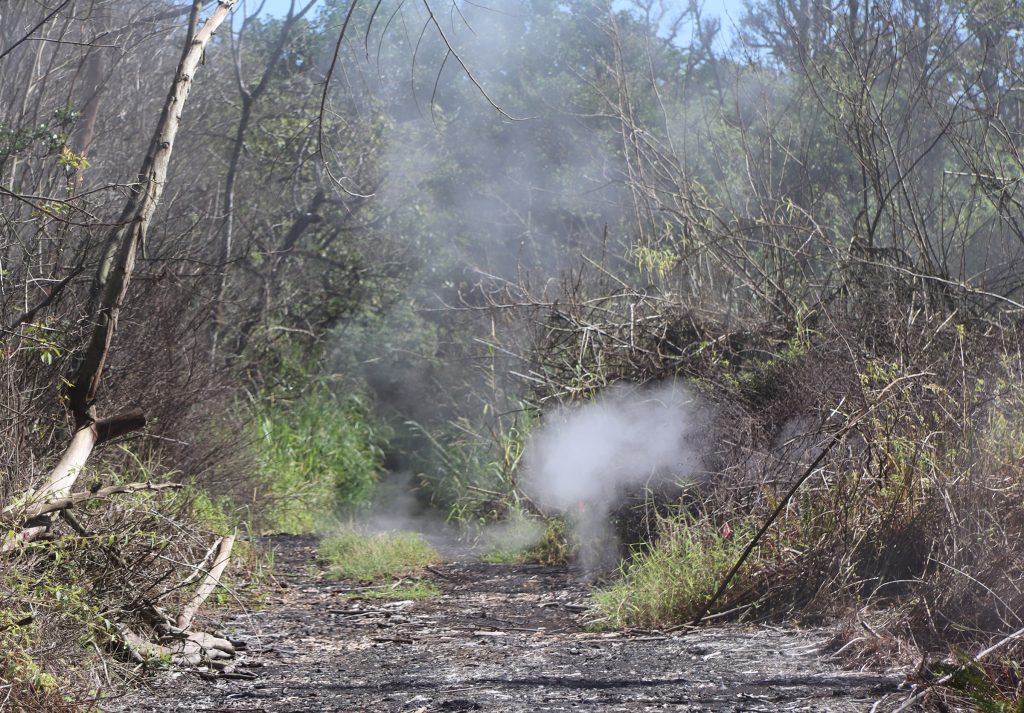 Although Kīlauea Volcano’s 2018 lower East Rift Zone eruption is over, residual heat, steam, and small amounts of other gases continue to escape from ground cracks and vents in the lower Puna area near Highway 130 as molten rock underground cools. USGS photo by C. Parcheta.

Kīlauea summit deformation has been consistent with slow magma accumulation within the shallow portion of the summit magma system, but gas measurements have not indicated significant shallowing of magma.

The south flank of Kīlauea continues to creep seaward following the May 4, 2018, magnitude-6.9 earthquake near Kalapana. Elevated rates of motion on faults after a large earthquake are common and are not cause for alarm.

Real-time sulfur dioxide emission rates are low at the summit and below detection limits at Puʻu ʻŌʻō and the Lower East Rift Zone.

No earthquakes with three or more felt reports occurred in Hawaiʻi this past week.

The USGS Volcano Alert level for Mauna Loa was changed to ADVISORY on July 2, 2019, because, for the past several months, earthquake and ground deformation rates at the volcano have exceeded long-term background levels. This increase in alert level does not mean that an eruption is imminent nor that progression to an eruption is certain. A similar increase in activity occurred between 2014 and 2018 and no eruption occurred.

This past week, approximately 43 small-magnitude earthquakes (most less than M2.0) occurred beneath the summit and upper Southwest Rift Zone, compared to about 80 earthquakes in this region the week before.

No significant changes in volcanic gas release on the Southwest Rift Zone were measured, and fumarole temperatures there and at the summit remain unchanged.

For more info on the status of Mauna Loa, please go to: https://volcanoes.usgs.gov/volcanoes/mauna_loa/status.htm