A group of protesters led by kupuna held a press conference this morning, in which they condemned the governor’s Emergency Proclamation that was issued on Wednesday afternoon.

“This is not a volcano that is erupting or some kind of a huge protest that is out of control,” said Walter Ritte, a longtime activist and cultural rights advocate from Molokaʻi.  “This is about aloha, yet he has signed that proclamation. Today we all sit here not knowing exactly what’s going to happen. But calling out the National Guard is an insult to us as Hawaiians,” said Ritte.

During an afternoon press conference on Wednesday, Gov. Ige said, “Since Monday, protesters have illegally occupied roads and highways. We are committed to keep a safe situation.  Law enforcement has been extraordinarily patient and respectful towards protesters; however, even though law enforcement has done everything it can to talk and reason with protesters, the protesters continue to break the law and place the safety of the public at risk.”

“Our naʻau wasn’t feeling good. The entire night we knew that they were coming for our kupuna,” said Vicky Holt Takamine, a kumu hula from Oʻahu who flew to Hawaii Island to participate in the demonstration.

“When I heard Governor Ige’s proclamation, the ʻeha (pain) and the words that he used–that he had to remove those who were illegally occupying our ʻāina (land)–we are… this is Hawaiian homelands this is our ʻāina.  We’re not the illegal occupants. This is ours,” said Takamine.  “You can not remove the makaʻāinana (commoners/populace). You can not remove the indigenous people from their own lands… I am offended,” she said.

In a morning teleconference today, the state clarified its proclamation.

“Law enforcement continues to plan and prepare for the movement of equipment up the mountain,” said Dan Dennison, senior communication manager for the Department of Land and Natural Resources. “Safety continues to be our highest priority. Please do not obstruct or hinder law enforcement. Foot traffic beyond the cattle guard is restricted.”

Dennison also sought to clarify information about road closures saying, “There were claims that the state decided to close Daniel K. Inouye Highway, or Saddle Road, yesterday without any justification, when in fact the state decided to close the road for safety reasons when it was obstructed by people and vehicles during the protest.”  (Further details are posted on our sister site at Big Island Now).

“Mauna a Wākea–I grew up on this mountain.  I used to run all over this mountain when there was no telescopes–nothing.  Now they got 13. Now they want another big structure here. We don’t want anything up here anymore. Enough is enough,” said cultural practitioner Kini Kaleilani Burke.

During Wednesday’s press conference Gov. Ige explained, “The number of protesters has swelled and their blockage or roads and highways creates a dangerous situation.  This effects the ability of first responders to address emergencies, disrupts the public’s ability to move freely and safely.  The protesters’ activities affects our local businesses, their ability to use Saddle Road and operate. The conduct of the protesters also diverts our law enforcement resources from protection of the broader community.  They are endangering both the health of themselves as well as law enforcement and ultimately the citizens of Hawaiʻi County,” said Gov. Ige.

A press release was issued by the Mauna Medic Healers Hui today, also condemning the Emergency Proclamation: “Over the last three days, there has been solid communication between leaders of the Maunakea protectors and local law enforcement, but there are concerns that Governor Ige’s Emergency Declaration yesterday has compromised that relationship.”

“There are layers of trauma, from historical trauma, intergenerational trauma and this type of event can be very triggering and emotional in-and-of itself” said Noelani Ahia, a member of Mauna Medic group.  “Much of what we do is being present for that and providing space for healing to occur in the midst of our stand.”

Some of the kupuna arrested yesterday were charged with obstruction.  At least four were taken away in ambulances with minor health issues, according to a state update.

Members of the Mauna Medic Healers Hui say they will continue to focus on “de-escalation, re-humanizing of the Kanaka Maoli,” and attending to people’s health and well being.

“Due to the extreme stress of the situation and their advanced age, our kupuna are becoming increasingly fragile. In spite of that, they are determined to put their bodies on the line in protection of the Mauna,” said Kalamaoka’aina Niheu.  “I call upon TMT, and in particular the Gordon and Betty Moore Foundation, University of California system, and Caltech to immediately cease and desist from construction of the TMT,” said Niheu.

The governor explained yesterday the state’s position saying, “We have been aware that many are passionate about this issue.  We were committed to keeping everyone safe, but we were committed to being respectful; and so we have tried to balance accommodations of people who were wanting to exercise cultural practices and we’ve been patient in trying to allow the protesters to express their feelings about the project.  We are taking steps to assure the rights of those in the project to get the project moving.”

“The state has underestimated our aloha for Maunakea. After an incredible display of kapu aloha and discipline in the face of extremely difficult circumstances, it was painful and emotional to watch our beloved kupuna being arrested,” said Ahia. “Governor Ige’s tactics of threat and intimidation are no match for the great love and commitment of the people to protect the sacred. The repercussions of the state’s choices will be sealed in the moʻolelo (stories) that are passed on for generations. There will be a reckoning,” she said.

Also on Thursday, District 5 Council Member, Matt Kanealiʻi-Kleinfelder on Hawaiʻi Island issued a statement this morning saying too many decisions are being made by off-Island politicians and business interests. “The unannounced closures of our highway were both premeditated, unnecessary and caused undue stress on county residents and visitors. The behavior of the kia΄i during the arrests was no different Monday than Wednesday. There was no emergency that warranted shutting down the Daniel K. Inouye Highway to date. There was no reason to invoke a State of Emergency to date,” said Kanealiʻi-Kleinfelder. 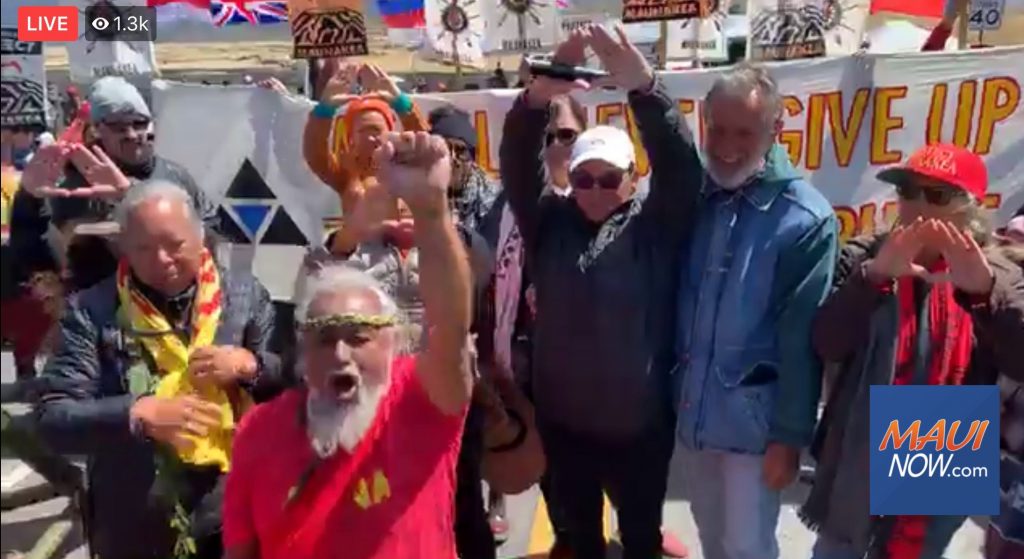