Councilmember Riki Hokama is speaking out against the recent removal of the Maui County Seal tapestry that he says was removed from the council chambers “without majority consent” of the Council on August 15.

“The tapestry was removed without a clear cause or reason, and without an opportunity for public input,” said Hokama of the artwork which was created by renowned weaver and Hawaiʻi native, Alice Kagawa Parrott under an artist-in-residence commission in 1972, nearly 47 years ago, according to Hokama.

In a telephone interview with Council Chair Kelly King this morning, she said the proposed removal was raised by incoming council member, Shane Sinenci due to health concerns.

King also said she had experienced coughing herself while chairing meetings and observed that the potential cause was the wall hanging, which she said “is not easily removed or cleaned,” and to her knowledge had not been cleaned since its installation.

In removing the piece, King said, “it wasn’t meant to take down a beloved tapestry,” but rather address concerns of health, which she said is “under her purview as council chair.” She further noted that the previous chair did not need approval for the purchase of Hawaiian drums that currently sit next to the chair’s desk.

Hokama maintains that the tapestry is “historically significant to the people of Maui County and the State of Hawaiʻi.” He said, “Such an historic art piece has tremendous public value and should be treated with the same provisions and standards as works belonging to the Hawaiʻi State Foundation on Culture and the Arts public art collection.”

According to Hokama, the decision to remove the tapestry and replace it with a County Seal was announced during a July 8 Chair’s Meeting.

During that meeting, Hokama expressed opposition, but King said, there was no comments in the minutes on the background which has since been presented in Hokama’s press release which was issued on Friday.

Hokama said all council members received an email on August 15 from the office of Council Chair Kelly King, stating the tapestry was being removed that day and installment of the County Seal would go into the weekend.

After the tapestry was removed, Hokama said he was informed it would be cleaned and hung in the 7th floor committee room—information he says was not disseminated officially to the entire County Council.

King contends that the information was shared during the July 8th meeting and said there was “lots of time” between that meeting and the removal, when members opposed to the plan could have reached out to her to discuss their concerns.

“The commissioning of this tapestry specified the woven art piece was designed for the Council and Council Chambers and should be returned to its original home immediately. The removal of this tapestry disregards the historical significance of the piece and is disrespectful to its creator, Ms. Kagawa Parrott,” said Councilmember Hokama.

King said it was apparent that Hokama “did not like the procedure” and said it appears that the piece was commissioned in 1972 when Hokama’s father served on the council.

“Change is hard,” said King. “The county is moving forward. We can respect the past, and we do; but we have to move forward,” said King, saying she “felt strongly” that there was a health issue.

“We can still honor the piece in a different area, but health comes first,” said King. The tapestry is being cleaned and moved to the council committee room, which King notes, “is available to any of the council members to use.” She also said a plaque can be made to depict the history behind the artwork and can be placed alongside it at it’s new location.

The county seal that was installed in place of the tapestry last week was paid for by monies in the previous budget before the end of the last fiscal year from carryover savings, according to King. She did not have immediate information on hand for how much the new seal and installation cost.

Born in Honolulu in 1929, Kagawa Parrott is a first-generation Japanese-American who studied at the University of Hawaiʻi and the famous Cranbrook Academy of Art in Michigan.

According to information provided by Hokama, “Kagawa Parrott is widely regarded as one of the country’s most important weavers, with permanent collections in London, Norway, New York City, Chicago, Honolulu and Maui.”

The state of Hawaiʻi owns four of her woven pieces as part of the Hawaiʻi State Foundation on Culture and the Arts permanent public art collection, according to Hokama.

Kagawa Parrott spent nine months as an artist-in-residence in Puʻunēnē. During this period, she completed several public commissions, including “The Royal Cape,” a large tapestry for the library at what is now the University of Hawaiʻi Maui College. She also spent time working and teaching schoolteachers during her stay.

According to information provided by Hokama: “Per County Contract No. 630, during that same year, Parrott was tasked with ‘the design, fabrication and installation of a tapestry weaved depicting the concept of our present County seal, to be located directly behind the chair to be occupied by the Chairman of the Council of the County of Maui, in the chambers of the Council on the eighth floor of the new County Building in Wailuku.’”

The total cost was $7,500 for construction, “design and installation which today equates to a value of over $46,000,” according to information provided by Hokama.

Hokama commented: “Until its removal on August 15, the tapestry hung for nearly 47 years in the Council Chambers, as a bridge between Maui County’s pre-statehood beginnings to the modern era, where the Kalana O Maui building has served as the seat of government since 1972. The Council Chambers belong to all residents of Maui County, and removing 47 years of history should not be the purview of one individual. For nearly five decades, the tapestry seal had been displayed as a celebration of both Maui County and one of Hawaiʻi’s truly treasured artists.”

King said the new county seal installation will be easier to clean and maintain.

King called the situation “unfortunate,” saying that amid all the items happening on the Maui agenda, she would rather have members reach out to her for collective solutions.

She noted that the tapestry is not the only change that is being eyed. “We are also looking at rearranging seats so we are facing the public,” said King.

According to King, rearrangement of seats was proposed in the past, but didn’t get enough votes to advance. That item, unlike the tapestry, “will have to be a budgeted item,” King said. 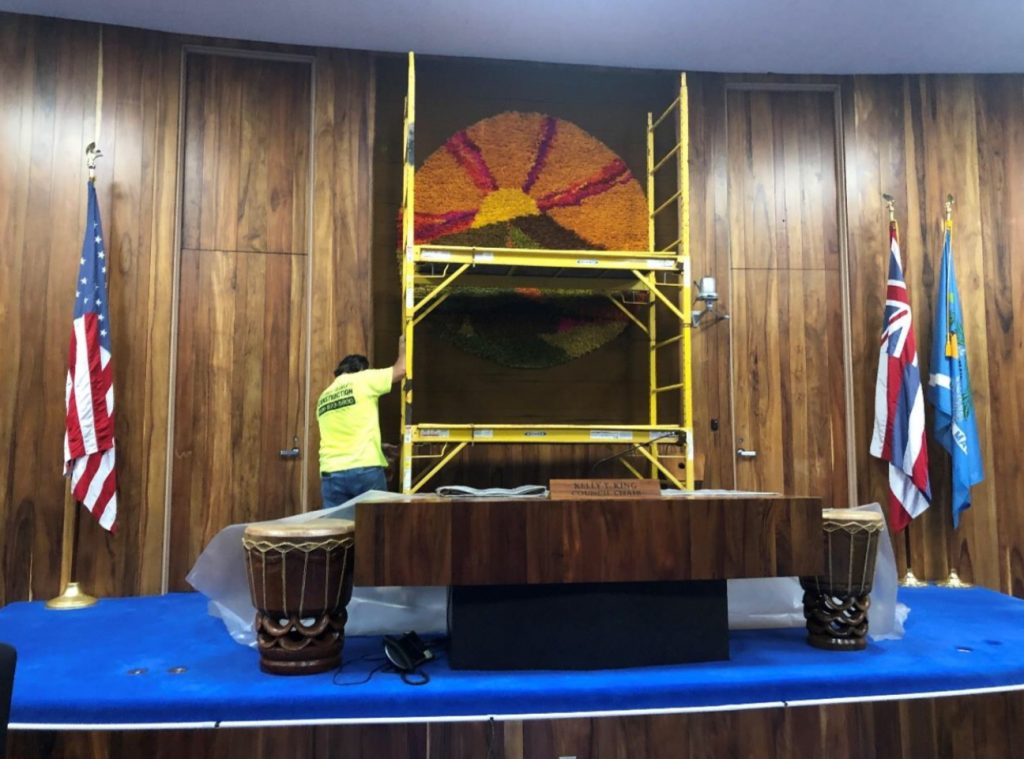